Sandy: Teamsters mourn death of Local 272 member who drowned on the job 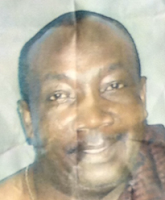 Local 272 and Joint Council 16 Teamsters are mourning the death of Brother Anthony Narh, a parking attendant at Empire Parking in Manhattan.

The Nation published the heartbreaking story of his tragic death in Superstorm Sandy:


Sometime during the mid-afternoon hours of October 29, as Superstorm Sandy was heaving up the East Coast, Anthony Narh, a Ghanaian immigrant, limped toward his job at Empire Parking, an underground garage serving one of the toniest strips of one of Manhattan’s toniest neighborhoods. Nestled near the watery edge of TriBeCa, Empire Parking was smack in the center of an evacuation zone—and Sandy was heading straight for it.

As the winds picked up and debris was flying up and down TriBeCa’s narrow streets, Anastasia Ratia, an architect and designer who lives with her aunt at 92 Laight Street, a high-end building adjoining the garage, ran into Narh and a co-worker. Ratia and her aunt had already evacuated but were making a last-minute run to the building; Narh, who was in his late fifties and walked with a severe limp, was just arriving for work. (At the garage, he was known as Jackson.)

“I said, what on earth are you doing here?” recalled Ratia, 34, who grew emotional as she recalled the story. “And he said, I was called in to come.” When Ratia asked whether the garage’s manager had asked Narh to come in, Narh placed the responsibility higher up. “He said, ‘No, the big boss.’ And I just said, that’s craziness. They’re just cars!”

When the Hudson River burst its banks several hours later, the water raced toward the garage and trapped Narh inside. He never made it out.

When Hurricane Sandy smacked into New York City, it struck one of the most economically divided cities in the country, and the story of the storm is as much a story of inequality as it is of weather. But few stories are shaping up to be as stomach-churning as Narh’s. Meryl Streep lives in the apartment building adjoining the garage. So does Gwyneth Paltrow and the model Karolina Kurkova.

Our thoughts and prayers are with his family and friends. Memories and condolences may be shared online here.

Brother Narh is the second Teamster to perish in the superstorm. Brother Bobby McDuffie from Local 863 died in a New Jersey warehouse. The two young sons of Brother Damian Moore, a sanitation worker with Local 831, were also victims of Sandy.

You can help victims by contributing to the Teamster Disaster Relief Fund here.
Posted by Teamster Power at 11:34 AM