That got people's attention.

Members of Congress are now being prodded to cut the social safety net by CEOs who receive trillions of dollars in -- well, in their own government safety net of defense contracts, bailouts, subsidies and tax breaks.

Negotiations are happening over the next few weeks. Groups representing ordinary Americans -- like the Teamsters -- are fighting strenuously against cuts to Social Security, Medicare and Medicaid. Teamster General President Jim Hoffa will appear on The Ed Show tonight to make the case against touching health and retirement benefits that Americans work their lives to earn.

But just this afternoon, AIDS activists decided to push back in their own way. Associated Press reports: 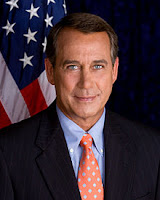 Seven people entered House Speaker John Boehner's office on Tuesday, stripped their clothes, and began chanting to protest anticipated budget cuts to HIV/AIDS programs if a deal is not reached to avoid the "fiscal cliff." The protest ended with the arrest of three of the protesters, all women, for indecent exposure.

"We grabbed attention by illustrating the naked truth and by showing how people with AIDS have had, literally, all of the clothes off of their backs taken away by these guys in Congress," one of the protesters, Jennifer Flynn, said...

Here's what you can do to aid the fight against cuts to Social Security, Medicare and Medicaid: Sign this petition here. And unless you're at home or in a locker room, it's probably best to keep your clothes on.
Posted by Teamster Power at 4:26 PM