No decision yet on RTW4less in Mich. 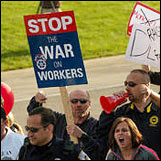 Gov. Rick Snyder said no decision was made Thursday on introducing an anti-union bill that would impoverish Michigan. That may be because hundreds of working Michiganders flooded the Capitol building to lobby their legislators. They told them the bill, cleverly misnamed "right to work," is a scam.
MLive reports:


Concerned about the right-to-work issue, Michigan union members pulled lawmakers aside in hallways and stairways of the state Capitol today, striking up impromptu conversations.

Union supporters ringed the rotunda, waiting to catch a brief chat with a lawmaker dashing from meeting to meeting. They jockeyed with schoolkids on guided tours for position among the building's ornate columns.

The union message to lawmakers? Don’t take up the anti-union legislation. The Michigan State AFL-CIO says about 300 right-to-work opponents were at the Capitol today to make their voices heard.


Every working person in Michigan should be concerned about the contents of this 'right to work' bill and question how quickly it is moving. Whether you are a union member or not, employees in 'right to work' states average $1,500 less in wages per year and are less likely to have access to benefits through their job.

Republicans are telling Michigan Live that the bill has been written and they'll propose it if they think it has a chance of passing.

Stay vigilant, brothers and sisters!
Posted by Teamster Power at 11:21 AM