The video above shows 33 Wal-Mart actions today in 33 cities. There were way more: Making Change at Walmart reports 1,000 actions throughout the country, including strikes in at least 100 cities and protests in 46 states.  Josh Eidelson reported in The Nation that it will take time to tally more exact figures because many strikers are walking off the job on their own in stores where no actions have been taken before.

Teamsters pledged their support for the strike, organized by an offshoot of UFCW. (The Teamsters and UFCW belong to the Change to Win federation.)

Teamsters all over the country came out to show solidarity with the striking workers. Teamsters from Local 728 raised a ruckus on the picket line in Atlanta. They joined a rally in front of a store in Durham, N.C. Joint Council 7's truck rolled up to the Wal-Mart action in San Jose, Calif. Teamsters from Local 89 came bearing "ULP Strike" signs in Louisville. Local 707 members brought handmade signs to the rally in Kingston, N.Y.

We'll have more reports of Teamster action over the next week.

Wal-Mart called the police on some strikers. In St. Cloud, Fla.,Vanessa Ferreira,  a 59-year-old cake decorator walked off the job -- alone -- and police arrested her for trespassing. Gather reported,


Ferreira said that the wages Walmart paid were far too low to survive on, and that workers had to use government benefits to supplement their incomes. She also said that many employees are on part-time status, which makes it very difficult for them. "They pay low wages, then the taxpayers pick up the tab for food stamps and Medicaid," Ferreira said.

The Naked Capitalist points out that it's too early to tell how effective the strike will be. But she also notes another threat to Wal-Mart: 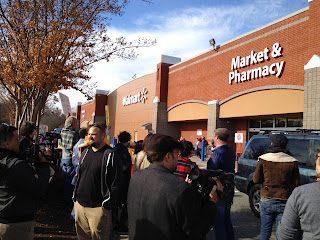 It’s too early to tell how effective the Black Friday against Walmart’s low pay and abusive working conditions were. The early reports from management and the organizers are wildly at odds with each other.

However, a new front may open up in the Walmart disputes: that of disruption to its international shipments. It’s too early to tell if this is serious or merely sympathetic window dressing, but the four and a half million strong International Transport Workers’ Federation had cleared its throat. From the Guardian:

Now the International Transport Workers’ Federation (ITF) has written to shipping owners and ship captains who carry Walmart goods and asked them to contact the gigantic global company and express support for the protesting workers. “Walmart workers taking industrial action know that their jobs are at risk. The least we can do to help is use our expertise at sea and relations with the shipping industry to back them in any way we can.”


ITF acting general secretary Steve Cotton told the Guardian: “We’re talking to captains and the ship operators moving Walmart goods, and asking them to register their concerns with the company about its treatment of staff – and the impact that could have on trade.”

As readers no doubt know, Walmart’s business model depends on being able to import cheap goods from overseas. It also uses the “just in time” inventory practices first developed by Japanese automakers, so it does not typically carry large inventory buffers. If international transport workers were to start interfering with or delaying Walmart shipments, it could prove to be disruptive.

Posted by Teamster Power at 5:41 PM