Election analysis: Labor is BACK! 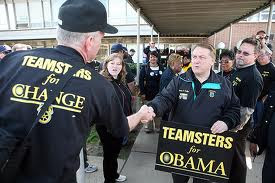 The mainstream media finally woke up and discovered that labor is alive and winning political campaigns. Check out some of the headlines from last night:

Our pal Ed Schultz said it best on MSNBC last night (from Teamsters Local 20 in Toledo):

Where unions put their resources is where the president won tonight.

Just to give you an idea of what the Teamsters did, consider this: 400 Teamsters worked full-time to re-elect Obama, making a half-million worksite contacts and reaching 100,000 Teamsters through the national phone bank.

The numbers only tell part of the story. Check out these comments from Brother Ray Torres, who successfully fought Prop 32, which would restrict union money in elections but exempt billionaires:


After weeks of travel, sliding down hills, scrapes, bruises, heat waves, combative management, run ins with the law and looong days...Prop 32 has been defeated! Im proud to be a Teamster and part of this strong organization. We mobilized! And we are victorious!

Even the influential, inside-the-beltway journalists who usually ignore us are reporting that labor propelled President Obama to victory. Here's Maggie Haberman in Politico:

Unions have had a rough period over the past few years, culminating in Wisconsin Gov. Scott Walker’s victory in a recall election into which labor leaders poured their hearts. They have been on the losing end of battles in Ohio about collective bargaining rights. And New Jersey GOP Gov. Chris Christie has famously done battle with them.

Their brand at a time of national recession and shared sacrifice has not shone. But this election was also a reminder at how effective labor is at political organizing — and winning.

Labor played a big role in helping Obama in Nevada and Wisconsin, as well as in Ohio. The popularity of the auto bailout in the Buckeye State with unionized manufacturers is hard to overstate. What’s more, the Citizens United ruling allowed unions to pool resources in a much different way this cycle.

Obama’s relationship with labor has not always been sanguine. But in the end, he owes a lot to unions, which proved their muscle remains strong.

OK, ignore that "shared sacrifice crap" -- she obviously has no idea how much unions have sacrificed. But we take the larger point.

And we like what Dave Jamieson wrote in this Huffington Post piece titled, "Labor Unions Deliver For Obama With Post-Citizens United Ground Game":

President Barack Obama's decisive victory in Tuesday's election proved that unions' political ground game may be as potent as ever in the new age of super PACs.

After the final tallies had trickled in, labor leaders were quick to note that unions played a critical role in tipping union-heavy states like Ohio, Wisconsin and Nevada in the president's favor, validating labor's wide-reaching effort to paint Republican presidential candidate Mitt Romney's economic plan as detrimental to working-class Americans.