Meet the greedy billionaire who wants to destroy Social Security 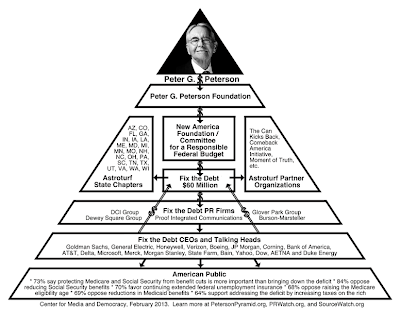 Pete Peterson may be the dumbest and meanest person on the planet. Sadly, he's also the luckiest.

He's lucky because he made billions by virtue of being a not-very-bright social climber and corporate predator. He's lucky because he persuaded a Democratic president of the United States to propose cutting Social Security, something no Democrat and few Republicans want to happen.

For those of you who haven't encountered Pete Peterson, he's a retired vulture capitalist who marshaled a bunch of oligarchs into the Fix the Debt coalition. As is the case with most billionaire-funded groups (can you say "Americans for Prosperity"?), Fix the Debt pretends to be exactly what it isn't.

The Fix the Debt CEOs don't give a rat's ass about fixing the debt. They just care about cutting retirement and health benefits for most Americans so they can pay fewer taxes and get bigger government contracts.

The Center for Media and Democracy exposed the people and the motives behind Peterson's astroturf supergroup in PetersonPyramid.org.


Peterson rallied the crème de la crème of the 1% to his cause. Hiding their self-serving motives and wrapping themselves in patriotic language of "shared sacrifice," 127 CEOs have signed up to his Campaign to Fix the Debt. Accompanied by elder "statesmen" (many of whom have gone through the revolving door and have undisclosed financial ties to firms that lobby for tax loopholes and other corporate welfare that contribute to the deficit), plus four PR firms, 80 full-time staff members, 23 phony state chapters, and a raft of Peterson-funded "partner organization," Fix the Debt has targeted a budget of $60 million in "the first phase."

You may remember, by the way, how Peterson made headlines opposing the main causes of the U.S. budget deficit: the Bush tax cuts and putting two wars on a credit card. Oh, wait, no he didn't...

Peterson's autobiography, "Education of an American Dreamer," reveals a sheer quantity of stupid exceeded only by a sheer quantity of greed and dishonesty. He claims to be an advocate of "free markets" (you know, as in Somalia, where the absence of government allows the creation of widespread prosperity. Oh wait, no it doesn't...). As a free-market advocate, Peterson conveniently ignores the link between government spending and commercial activity. He draws no lesson from hischildhood in Kearney, Neb. There, his father prospered by opening a cafe near a state college, a government-subsidized railroad and an Army Air Force base.

Peterson seems aware of his own dishonesty only once in the book, when he admits he was thrown out of MIT for cheating. He copied a paper from Roy Cohn, the anti-gay anti-communist who turned out to be gay. Peterson instead graduated from Northwestern University and then social climbed his way to the top of an advertising agency. Then he became CEO of Bell & Howell, a movie projector manufacturer.

Though Peterson writes about his love of building businesses, he mostly recounts how he cut costs at dying companies. At Bell & Howell he failed to steer the company into the digital age.

The most telling section of the book comes during Peterson's time in Washington. He followed his pal Sen. Chuck Percy to the nation's capital, where he fought off a tax aimed at punishing corrupt philanthropic foundations. That would prove useful later when he started the Peter G. Peterson Foundation to Destroy America.

In the 1970s, Peterson became an assistant to President Richard Nixon on economic affairs. He recounts how he worked with Henry Kissinger to use economic policy to achieve diplomatic goals, a key a tenet of free-market economics. Oh wait, no it isn't...

As Commerce secretary, Peterson was a "reshaper of trade policies;" in other words, he wiped out trade barriers that protected good U.S. jobs. He also helped seal the 1972 grain deal with Russia, which hurt America's small farmers, consumers and taxpayers but helped big export companies whose executives had inside knowledge of the transaction.

Peterson then parlayed his Washington connections into a job on at Lehman Brothers, a Wall Street firm that cooked its books and went bankrupt in 2008.  At Lehman, Peterson sold off American businesses like Bridgestone to Japanese companies. He also pocketed money by enabling CEO plunder as a member of corporate "compensation committees."

In the middle of Peterson's account of how he helped dismantle the U.S. economy, he presents a scene of breathtaking hypocrisy. He describes how he took time out from selling old-line U.S. companies to the Japanese to tell President Ronald Reagan his concerns about the trade deficit. Yup, the trade deficit he helped create. Stupid or dishonest? You make the call.

Peterson then goes on to co-found Blackstone, a private equity firm, where he pioneered the practice of loading companies with debt, extorting management fees from them and then kicking them to the curb when they start to fail. In a rare insightful moment he warned against his partner's lavish 60th birthday party -- because it would look bad. As John Carney wrote in Business Insider,


Someday when the perfect book is written about the financial excesses of this decade, the opening chapter will take place at Blackstone founder Steve Schwarzman's 60th birthday party. Held at the Seventh Regiment Armory on Park Avenue, the party is said to have cost $3 million and featured a performance by Rod Stewart.

Peterson and Schwartzman then took Blackstone public, which made Peterson a billionaire but didn't work out so well for investors. Peterson was so concerned about fixing government debt that he insisted on paying taxes on his gains at the normal 35 percent rate instead of the 15 percent rate for Wall Street banksters. Oh, wait, no he didn't ... Well, at least he said it was unfair.

Unfortunately, this self-righteous old fool wasn't content to destroy U.S. jobs and business enterprises during his career as a corporate predator. As a retiree, he wants to destroy the retirement and health benefits that ordinary Americans work so hard to earn. And he's annoying the hell out of us with his lectures on how we need to live with less.

Why is Pete Peterson so cruel? Perhaps one answer lies in his unhappy childhood. He was bullied by his father and his classmates:


I was labeled a sissy by the other boys in those circumstances, and I suppose I was...

My father enforced with his hands the importance of respect for him and his rules. If I came home even five minutes late at night, he slapped me...

And now, the nation weeps for Peterson's past suffering.