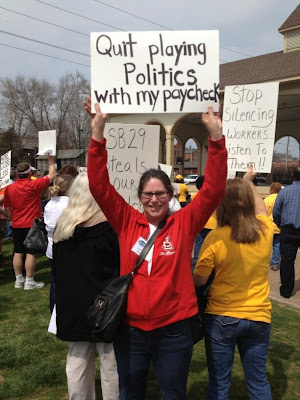 Working Missourians rallied yesterday against anti-worker bills pushed through the Legislature by lawmakers who secretly accept meals, concert tickets and vacations from lobbyists.

The bills -- paycheck deception, an attack on prevailing wages and No Rights At Work -- are written by ALEC, the corporate escort service for lobbyists. And a Kansas City Star expose yesterday tells us about:


$8,200 spent by a handful of lobbyists to treat lawmakers to meals last July in Salt Lake City at the convention of the American Legislative Exchange Council (ALEC).

According to the Star, lobbyists spend a billion dollars a year lavishing gifts on Missouri state lawmakers. Much of that goes unreported as it is laundered through something called "“Leadership for Missouri Issue Development." That meant included two fancy steak dinners for unnamed "Republican leaders" that cost $3,500.

Working families couldn't counter with pricey steak dinners, so they held a rally on Monday. Several hundred union members came to Frontier Park in St. Charles to protest the attacks on their paychecks.


About 200 union members rallied here Monday to  build some pressure on the Republican-run Missouri Legislature - and Senate leader Tom Dempsey of St. Charles in particular - to reject bills they consider anti-labor.

"Let me make this very clear to every elected official," said Dave Cook, president of United Food and Commercial Workers Local 655.  "We will not back down, we will not go away, we will not stop. We will door-knock your constituents."

It would be nice if they stopped accepting bribes from corporate lobbyists, too.