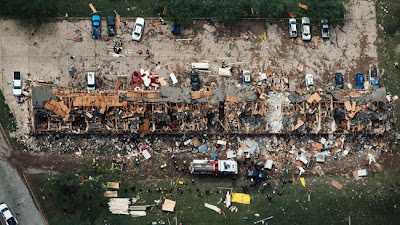 The deadly explosion at the West, Texas, fertilizer plant killed at least 14 people and possibly many more, as 60 are missing. Eleven of those killed were first responders.

OSHA hadn't inspected the plant in 28 years. And in contrast to the massive response by law enforcement to the Boston Marathon bombings, only a handful of investigators from the ATF and the Chemical Safety Board were sent to West.

Richard Kim wrote a terrific piece in The Nation about it:


I didn’t know that as of Sunday, April 21, four days after the explosion, officials have confirmed fourteen deaths, eleven of whom were first responders, and that as many as sixty people remain missing. I didn’t know the name Jerry Chapman, 25, who volunteered with the Abbot Fire Company and who, according to his girlfriend Gina Rodriguez, was training to be an EMT. I didn’t know the name Cody Dragoo, 50, who was both an employee of the fertilizer plant and a West firefighter (the town has an all-volunteer force). And I had never heard of West firefighter Morris Bridges, 41, who lived just a few doors down from the facility and whose 18-year-old son Brent Bridges stood on the porch as the blast that killed his father blew out the windows of their home.

I do know, however, the names and faces of Sean Collier, Krystle Campbell, Martin Richard and Lu Lingzhi. I know that Sean, 26, had been on the MIT police force for a little more than a year when he was allegedly shot by Tamerlan and Dzhokhar Tsarnaev, that Lu was a Chinese national studying at Boston University, that Krystle was a regular Boston Marathon watcher and that Martin was just 8 years old and had recently made a sign that read No More Hurting People Peace. I’ve seen the photo of him holding, with obvious pride and joy, those words drawn on a sheet of blue construction paper more than a dozen times. I can’t get away from it on Facebook, and when it shows up on my feed, I can’t look away.

What separates these victims from one another? Surely not innocence, for they are all innocent, and they all deserve to be mourned. And yet the blunt and awful truth is that, as a nation, we pay orders of magnitude more attention to the victims of terrorism than we do to the over 4,500 Americans killed each year while on the job. As former Secretary of Labor Hilda Solis once put it, “Every day in America, thirteen people go to work and never come home.” Very little is ever said in public about the vast majority of these violent and unnecessary deaths. And even when a spectacular tragedy manages to capture our collective attention—as the West explosion briefly did, as the Upper Big Branch Mine disaster did three years before—it is inconceivable that such an event would be constituted as a permanent emergency of world-historic proportions.

Posted by Teamster Power at 1:01 PM