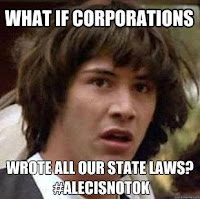 Our brothers and sisters at Local 886 in Oklahoma City are mobilizing hundreds of Teamsters to march FOR the middle class and AGAINST ALEC in early May.

ALEC, the billionaire-backed escort service for corporations and state lawmakers, will hold its annual meeting on May 2-3 in the Oklahoma state capitol. Behind closed doors they will plan ways to eradicate the middle class by weakening workers' rights, eliminating consumer and environmental protections, empowering corporations and privatizing education.


Make plans now to attend the Rally and March against the actions of ALEC. ALEC and its followers directly affect you, Union or not. Bring your family and friends, this will be a great opportunity to support what YOU believe.

They'll begin the march at 4 pm at the Coca-Cola Event Center. It will go through Bricktown, to a rallying point at Cox Convention Center where ALEC is meeting. Speakers will include Harold Schaitburger, president of the International Association of Fire Fighter, state Sen. Connie Johnson and state Reps. Richard Morrissette and Anastasia Pittman. There'll be hot dogs and live music afterward.

If you can't make it, you can sign a pledge here to tell your friends and neighbors about ALEC's attempt to turn your state government over to big corporations. The pledge, along with detailed information about the event, can be found here.
Posted by Teamster Power at 2:57 PM