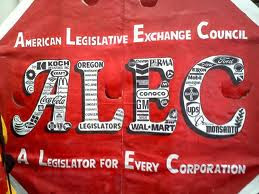 Our brothers and sisters in Oklahoma are spreading the word about the nefarious ALEC as the group heads toward Oklahoma City for an annual confab. Teamsters Local 886 is working hard to shine a bright light on ALEC's misdeeds during its stay in Oklahoma City on May 2-3. ALEC "delegates" will be treated to a boisterous march for the middle class (we're getting visuals of Teamsters trucks here) and a rally at a yet-to-be-disclosed location.

If you're new to ALEC, it's the corporate dating service for lobbyists and state lawmakers. Funded by the Benedict Arnold Koch brothers, it's a major tentacle in the vast right-wing conspiracy. ALEC is responsible for many state laws that are helping to make your lives miserable. No Rights At Work legislation is straight out of ALEC. So are most bills that punish workers and empower billionaires.

Here's a short list of giant corporations that benefit from ALEC's meddling in your state Legislature:
ALEC is also responsible for tax proposals so extreme that even Republicans oppose them. Huffington Post reports:

These governors produced proposals straight out of the American Legislative Exchange Council (ALEC) fiscal policy playbook. In slightly different ways, all four governors sought to provide huge boons to upper-income taxpayers and profitable corporations, and they (wrongly) touted their proposals as surefire paths to economic growth.

There's Plenty of information has recently been brought to light about ALEC at the www.alecexposed.org website.

You can find a list of ALEC politicians in your state here and here.

You can find a list of ALEC stink think tanks (which pretend to be non partisan) in your state here.

You can find a list of ALEC scholars here (you'll also see them on Fox News).

So please take the pledge and sign this petition here.
Posted by Teamster Power at 1:10 PM