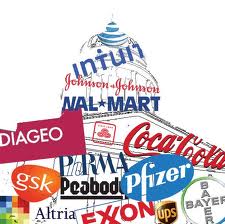 Four of the worst governors who've given working people grief since 2011 are in political trouble, a top pollster tells us.

These are all corporate stooges who mask their devotion to predatory billionaires with Tea Party rhetoric. It hasn't gone so well for them.

In Wisconsin, Gov. Scott Walker caused an uprising when he tried to destroy collective bargaining rights for public service workers (much of the law has been stayed by the courts).

In Florida, Gov. Rick Scott tried (and failed) to kill 5,000 Teamster jobs by privatizing prisons. Now he wants to take away pension benefits for state workers.

And in Maine, Gov. Paul LePage kicked off his anti-worker jihad by removing a mural depicting labor history from the Maine Labor Department -- "because it sent the wrong message."


Mr. Scott, Mr. Corbett, Mr. LePage and Mr. Snyder  ...  lead states that were carried by President Obama in both 2008 and 2012. All were helped by favorable political winds in 2010 that no longer blow so hard.

Mr. Scott appears to be in the most trouble. A recent Quinnipiac survey showed former Gov. Charlie Crist, a Republican-turned-Democrat and a possible candidate in 2014, beating Mr. Scott, 50 percent to 34 percent.

Mr. Scott has been stocking up campaign contributions, but currently only 32 percent of voters say he deserves a second term.

Mr. Corbett is in a similar position. Sensing weakness, Pennsylvania Democrats are lining up to challenge him...

In Maine, Mr. LePage’s best chance of winning re-election may be to repeat his 2010 route to victory: winning a three-way race where the left-leaning and moderate votes are split. A recent survey by the Pan Atlantic SMS Group showed Mr. LePage leading all three-way matchups but losing by eight percentage points to an independent, Eliot Cutler, in a two-way race.

And here's some more good news: Michigan Gov. Rick Snyder, who rammed through a No Rights at Work law in December, isn't a shoo-in for re-election. Reports Silver:


Mr. Snyder is in a slightly less precarious position in Michigan. His net job approval rating is negative, but in the single digits. The Rothenberg report rates the race as a tossup, but Michigan is rated as leaning Republican by Sabato’s Crystal Ball and as likely Republican by the Cook report. Part of the reason for Mr. Snyder’s relative strength is the lack of significant opposition. No prominent Democrat has announced an intention to run, but if one did, Mr. Snyder’s chances could certainly diminish.

Other anti-worker governors are also in trouble -- for example, Nikki Haley in South Carolina -- but Silver explains why they're likely to be re-elected.