Expose of Apple's neo-slaves gets pushback 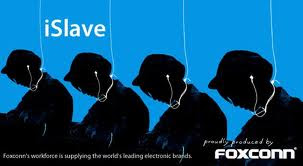 Poor widdle Apple. That nasty New York Times beat up on the itty bitty iPhone maker and got a Pulitzer for it! How unfair!

At least that's what you'd think is going on if you peruse the headlines. Yahoo reported "The New York Times Gets Its Pulitzer For Picking On Apple." Forbes ran the exact same headline. "Apple bashing earns New York Times a Pulitzer" was the way The iDownloadBlog put it.

We suspect those headlines were written with Apple's help. Because the story is a good one, and it doesn't reflect well on Apple. It's about the company's practice of using manufacturers in Asia that treat their workers like indentured servants. To put it nicely.

The story didn't just appeal to Pulitzer judges. It struck a nerve with American workers watching their incomes stagnate or fall as their workloads increase -- or worse, as their hours get cut to part time or they receive a devastating lay-off notice. At fault for their plight are companies like Apple that abandon the U.S. for cheap labor and subsidized factories overseas.

The story the Times told was a fair one. Headline "How the U.S. Lost Out on iPhone Work," it reported:


Apple employs 43,000 people in the United States and 20,000 overseas, a small fraction of the over 400,000 American workers at General Motors in the 1950s, or the hundreds of thousands at General Electric in the 1980s. Many more people work for Apple’s contractors: an additional 700,000 people engineer, build and assemble iPads, iPhones and Apple’s other products. But almost none of them work in the United States. Instead, they work for foreign companies in Asia, Europe and elsewhere, at factories that almost all electronics designers rely upon to build their wares.

“Apple’s an example of why it’s so hard to create middle-class jobs in the U.S. now,” said Jared Bernstein, who until last year was an economic adviser to the White House.

“If it’s the pinnacle of capitalism, we should be worried.”

The story alludes -- but doesn't dwell on -- China's unfair trade practices. Apple chose to manufacture glass for the iPhone screen in a Foxconn factory subsidized by the Chinese government.


The Chinese government had agreed to underwrite costs for numerous industries, and those subsidies had trickled down to the glass-cutting factory. It had a warehouse filled with glass samples available to Apple, free of charge. The owners made engineers available at almost no cost. They had built on-site dormitories so employees would be available 24 hours a day.

If "on-site dormitories" sounds a bit like slave quarters to you, well, we can't disagree. Then there's this:


The facility has 230,000 employees, many working six days a week, often spending up to 12 hours a day at the plant. Over a quarter of Foxconn’s work force lives in company barracks and many workers earn less than $17 a day...Foxconn employs nearly 300 guards to direct foot traffic so workers are not crushed in doorway bottlenecks. (Ed note: Yeah, sure, that's why they employ guards.)...

In mid-2007, after a month of experimentation, Apple’s engineers finally perfected a method for cutting strengthened glass so it could be used in the iPhone’s screen. The first truckloads of cut glass arrived at Foxconn City in the dead of night, according to the former Apple executive. That’s when managers woke thousands of workers, who crawled into their uniforms — white and black shirts for men, red for women — and quickly lined up to assemble, by hand, the phones.

No, we're not feeling a lot of love for Apple. We think the Pulitzer board made a good choice.

Posted by Teamster Power at 2:40 PM