10 things you should know about paycheck deception 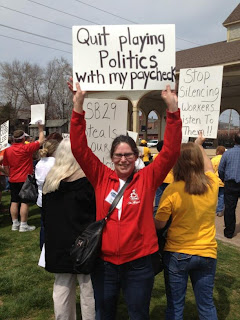 Teamsters Joint Council 13 in Missouri is fighting against extremist politicians attacking workers by restricting what they can do with their paychecks. Lawmakers are pushing a so-called "paycheck deception" bill, pretending it's about "freedom" or "choice" for workers. They're counting on the general public not understanding what paycheck deception really is.

So our brothers and sisters in Missouri offer 10 facts people need to know about paycheck deception:

1. Paycheck deception laws create unfair regulations. These laws require labor organizations to go through burdensome bureaucratic hoops in order to deduct dues from members’ paychecks and to use that money for political advocacy. No other corporation, CEO, or other organization has similar restrictions. The sole intent is to force the union to spend more resources collecting dues so that they have less ability to advocate for workers at workplaces and in politics.

2. Paycheck deception laws limit free speech. These laws apply rules to union members that don’t apply to any other organization. A business that belongs to a Chamber of Commerce, for instance, can’t opt-out of paying annual dues and still belong to the Chamber. Similarly, a shareholder in a corporation has absolutely no say in how that corporation spends money in politics. Essentially, paycheck deception laws say that the government has more say in how union workers spend their money than the workers themselves.

3. Paycheck deception laws have, and have always had, one purpose: attack unions. California school voucher activists who wanted to weaken the local teachers’ union first used paycheck deception as a tactic in 1998. These laws have always been about weakening unions and those who speak up for workers. They have never been about protecting workers or giving workers a “choice.”

4. Proponents call them “paycheck protection” laws. The people who push these laws want you to think these laws protect workers, when in fact they just protect the CEOs and special interests that don’t want any opposition from organized labor. The “protection” they are implying already exists, as union members already collectively decide how their money is spent. “Their transparent motive is not to protect workers, but to silence them by diminishing their collective voice,” wrote Joshua Rosencranz of the Brennan Center for Justice.

7. Union members are not calling for these laws. While arguing for paycheck deception in Missouri, legislators claimed they had talked to union workers who felt coerced by the current deduction process, but failed to produce them. No union workers testified in favor of the Missouri bill. In fact, a recent Hart research poll found that 75 percent of union members want their deductions to be used to advocate for the middle class in the political arena.

9. Paycheck deception laws are often found unconstitutional. In Alabama, Arizona, and Washington, paycheck deception laws were ruled unconstitutional by state Supreme Courts. The laws frequently violate the First Amendment – since union workers already have the choice to opt-out of their unions’ political activity. If Missouri passes this law, they will have to waste more taxpayer money defending it at court – they’ll probably lose.

10. Politicians admit that paycheck deception laws are a stepping stone to further union restrictions. Missouri Speaker Tim Jones admitted that while “there are other ways to skin a cat” to limit union workers’ political power, paycheck deception “a way to get to the ultimate goal of right to work.” Patrick Werner of the Koch-backed Americans for Prosperity also called paycheck deception a “first step” to making Missouri a “right to work state.”

So-called “right to work” laws ban fair share clauses in contracts, forcing unions to represent workers whether or not they pay dues – another tactic used to weaken unions.