Boston police: Today's heroes are the Wal-mart workers of yore 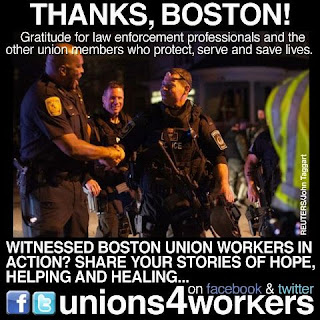 Boston police aren't always treated with the kind of adulation they received at yesterday's pre-game ceremonies at Fenway Park. Writes Jimmy Golen at the Associated Press:


Some of the biggest cheers were for the police who tracked down the suspects.

More often the Boston police are vilified by corporate stooge local columnist Howie Carr for making too much money. Carr, if you haven't been offended by his radio show yet, is a Republican operative with a cruel streak who masquerades as a journalist.

There are plenty of people who agree with Carr, notes David B. on the Unions 4 Workers Facebook page:


Congratulations to law enforcement on an amazing job in Boston. Remember, virtually every officer - local, state and federal (except FBI) - is a union member. And nearly all of them have suffered through budget cuts, layoffs, furloughs etc. because a lot of people who are standing in the street cheering don't want to pay taxes to support police officers, fire fighters and teachers. Maybe people will start to adjust their priorities.

At the risk of politicizing the tragedy in Boston, we thought we'd offer this little reminder of how the Boston police had to fight for decent wages and benefits. As iBoston.com notes,


New officer pay had not risen in sixty years, since 1857 when new recruits received two dollars daily. Officers worked seven days per week, with a day off every other week during which they couldn't leave town without special permission. Depending on duty, officers worked between 73 and 98 hours weekly, and were required to sleep in infested station houses kept in deplorable condition.

Early in the last century, the Boston police were as underpaid and overworked as any Wal-mart worker today. From 1913 to 1919, the cost of living rose by 76 percent, but police wages increased just 18 percent.

The Massachusetts AFL-CIO reminds us that the Boston police earned much less than unskilled factory workers. Police union sympathizers were smeared as Communists:


The political climate after World War I was characterized by immense fear, instilled by “government and business propaganda”  about a Communist takeover of the United States. One of the main targets of this propaganda was the Labor Movement, which organized workers in order to collectively bargain for fair wages and hours. The Red Scare was increased as police forces across the nation began to organize in unions. Propaganda made it seem as if the Communists were attempting a take over from within.

Nothing fueled the anti-union, Red Scare propagandists more than the Boston Police Strike of 1919. Police in Boston had a number of reasons why they wanted to join a union. Like any other worker in any other sector, they felt that their wages were too low and their hours were too long. “Their wages were even significantly lower than the earnings of most unskilled factory workers. For this meager pay they were asked to work as many as seventy-two to ninety-eight hours a week.”  The Boston Police force, discouraged by lack of attention paid to their numerous grievances, joined the “Boston Social Club, affiliated with the AFL”  in August of 1919. Police Commissioner Edwin Curtis believed that a police officer could not belong to a union and serve his proper duty at the same time. As a result of his misguided beliefs, Curtis promptly suspended nineteen police officers who were working as union organizers.

In retaliation to the suspension of the nineteen union officers and the Police Commissioner’s refusal to allow the them to join the AFL, the Boston Police went on strike. A few people took advantage of the situation, looting stores and breaking windows. As a result, the State Guard was called in to stop the criminals. Public opinion began to turn against the Police, and national AFL President Samuel Gompers suggested that the officers return to work and to the bargaining table. Commissioner Curtis opted to not allow the striking officers their jobs and to completely replace the force. The Commissioner had the full support of President Woodrow Wilson and then Governor Calvin Coolidge, who had made himself a national hero by quelling the strike.