The picket lines were extended to six Republic locations in five Ohio cities early this morning even as Teamsters at Republic's McDonough, Ga., hauling yard went on strike. 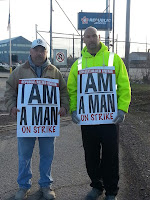 The 23 landfill workers, members of Teamsters Local Union 377 in Youngstown, went on an unfair labor practice strike on March 27.

Close to 600 drivers, helpers and mechanics at Republic’s Youngstown, Columbus, Canton, Elyria and Cleveland hauling yards are refusing to cross the picket lines. The drivers, helpers and mechanics honoring the lines are members of Teamsters Local Unions 377, 284, 92, 20, 244 and 964, respectively. These workers have the legal right to refuse to cross picket lines in support of striking workers at other Republic locations.

Thousands of Teamsters have now refused to cross picket lines Ohio, Indiana, Illinois and California in support of Local 377's 2-1/2 week strike against Republic. The company's largest shareholder by far is trash tycoon Bill Gates. Though Gates tries to improve his reputation by giving money to improve sanitation overseas, he's reaping enormous profit from a sanitation company with an abysmal environmental record.

Gates' labor record at Republic isn't much better. Over the past year, Republic/Allied Waste has forced multiple lockouts and strikes, disrupting trash collection for hundreds of thousands of people across the United States and putting communities at risk. Republic earned profits of more than $572 million in 2012.

The 40 Teamsters employed by Republic in Georgia are striking because Republic broke federal labor laws. The press statement says:

Randy Brown is president of Teamsters Local 728, which represents the Georgia workers:


Republic Services is one of the most abusive corporations I’ve encountered. Dr. Martin Luther King Jr. was born here in Atlanta, but Republic will not give its workers in McDonough Martin Luther King Day as a paid holiday. This group of workers is 90 percent African-American and have seen no wage increases for four years despite Republic making more than a half a billion dollars in profit each year.

Teamster solidarity is inspiring workers throughout the company to stand together. Renard Henley, a
residential driver in McDonough, Ga., said:


I'm on strike because this giant waste corporation thinks it can get away with breaking the law to intimidate us and bully us, and cheat us out of pay for time that we worked. We organized and chose to be represented by the Teamsters in 2011, but the company refuses to bargain in good faith with us for a fair contract. I’ve been talking with other workers on the Facebook page, and we have been following the Youngstown strike closely. We have all had enough of the company’s greed.

In January many of us had to take the day off unpaid to march in the annual Martin Luther King Jr. day march in Atlanta. We marched alongside our colleagues who work for Republic in Memphis, and it became clear very quickly that we all needed to come together as one to be able to stand up to this corporation. Republic’s bullying will end because we, the workers, will stand up as long as it takes to stop it.

Darrell Zeh, a landfill worker and member o Teamsters Local 377 in Youngstown, said he's sick of the $8 billion company breaking the law to bully its own workers.


I've picketed now in three other cities and the support has been overwhelming. Everyone seems to be fed up with this corporation's greed.


When I started talking to my colleagues from other cities, we realized that Republic treats workers this way everywhere.

We go on the Facebook page and share photos and stories with each other, and lots of them are asking when it’s going to be their turn to go out. We’ll be out here as long as we need to be. When Round 2 comes – if it comes to that – we’ll be out here again supporting my brothers and sisters however it’s needed.