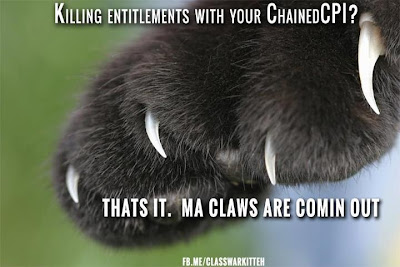 Sen. Bernie Sanders of Vermont and Democratic Reps. Mark Takano of California and Rick Nolan of California (a former Teamster) will lead the protest at 12:30 pm. Sanders has vowed to do everything in his power to stop the cuts to Social Security.

The Teamsters belong to the Strengthen Social Security coalition, which urges us to fight against the cuts:

This is an emergency. If the President proposes Social Security cuts in his budget, it can only get worse from there. Our parents, children, friends, and neighbors are counting on us.

Help us tell the President: No cuts to Social Security, Medicare and Medicaid. Join us this Tuesday, April 9th at 12:30 pm EDT to deliver hundred of thousands of petitions to the White House to remind the President why we elected him.

There's still time to add your name to a petition opposing Social Security cuts. Sen. Tom Harkin started a petition here. It urges President Obama to reconsider his decision to include the chained CPI in his budget.

Sign now. And watch the event on the livestream here.