Memo to the Senate: Read the Constitution 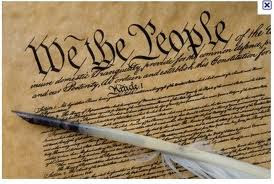 Retiring senator Max Baucus wants a bill passed that would grease the skids for another secretly negotiated trade deal to be rammed through Congress. Before anyone even reads the fine print.


An influential Democratic U.S. senator said on Wednesday he was working on a bipartisan bill to boost President Barack Obama's ability to negotiate trade deals, while Republicans made clear that more White House involvement is needed to pass the measure.

Article I, Section 8 of the U.S. Constitution states "The Congress shall have Power ... To regulate Commerce with foreign Nations."

What Baucus wants is Fast Track, an undemocratic procedure that allows no amendments and limited debate on a bill written by the Executive branch for trade deals negotiated in secret. Fast Track is the prerequisite for congressional approval of the Trans-Pacific Partnership agreement (TPPA), a trade deal being negotiated among a dozen Pacific Rim countries. Supporters hope it will pass this year.

The Teamsters want any trade deal to be carefully vetted by Congress to make sure it benefits working families -- and that no special breaks for corporations are sneaked into the fine print.

We suggest Sen. Baucus re-read the U.S. Constitution before he sails off into the sunset.