How to talk about Right to Work 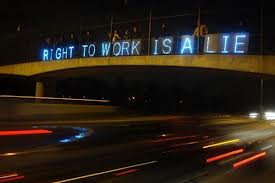 Here’s how to argue about Right to Work with people who think they know what it is.
Tell them (nicely) that they don’t know what Right to Work really is. Tell them it’s a confusing, complicated and controversial proposal that damages the working class.
It was cooked up decades ago by greedy billionaires. They named it Right to Work to fool people into thinking it means more freedom. It doesn’t. Right to Work means less freedom for workers – much less.
It puts more pressure on struggling working-class families. It eliminates job security, lowers pay, forces workers from full-time jobs to part-time, and gives workers less freedom and flexibility to spend time with their family or do whatever is important to them in life.
Corporate interests want to pass Right to Work so they can destroy unions that stand up for workers. Getting rid of unions would let them ship more jobs overseas, continue to rig the tax system in their favor and demand more work from employees while treating them with less respect.
Right to Work is being pushed in state capitols by ALEC, the escort service for corporations and state lawmakers. ALEC is supported by CEOs of multinational corporations who only care about profits and mistreat the workers that generate them; by the Benedict Arnold Koch brothers; and by predatory Wall Street banks.
Right to Work has had far-reaching consequences in states where it has been enacted. It has delivered lower pay for employees and higher unemployment rates in the states that passed it. And it threatens public safety by making it harder for nurses, police officers and firefighters to do their jobs. It guts workplace safety laws and eliminates protections for people who blow the whistle on threats to public safety.
So tell your misguided friends who think they know what Right to Work is that it does far more harm than good. It’s a risky, divisive, unfair and politically motivated attack on the working class.
And here’s a final tip: Don’t be too harsh on the CEOs. After all, some of them are good employers who create jobs. Be sure to distinguish them from overpaid and out-of-touch CEOs who care more about their bonuses than the workers who made their companies profitable.

Posted by Teamster Power at 4:34 PM