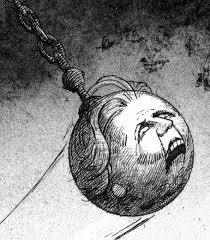 It figures that Wisconsin Job-killer Gov. Scott Walker would lament the death of Margaret Thatcher. She was a job-killing, privatizing, union-busting machine and she made most Britons poorer and politically weaker. In the end, only the banksters and bililonaires benefited from her leadership.

That appears to be Scott Walker's dream.


After expressing sadness Monday on Facebook over Thatcher’s passing, Walker added a quote from the Iron Lady that fits with the image he has sought to establish throughout his divisive governorship:

What crap. Walker is as much a hapless pawn of Wall Street and the Koch brothers as Thatcher was of the UK's own banksters.

Michael Hudson, an economics professor, explains that London banksters viewed her as a puppet doing their bidding:


Privatization’s ultimate beneficiary was the City of London, the square mile of financial institutions that obtained the quickest benefits and turned the program into something rather unanticipated by Mrs. Thatcher and Mr. (Nigel) Lawson (chancellor of the Exchequer). The rentiers for their part seem to have perceived the Thatchers and (Milton) Friedmans as pawns, an advance infantry of promoters wrapping austerity economics in populist garb – policies that otherwise would have been difficult (if not impossible) to sell to voters.

Hudson and Jeffrey Sommers describe Thatcher's impact on the U.K.'s 99 percent in Counterpunch:


When Mrs. Thatcher took power, 1 in 7 of the England’s children lived in poverty. By the end of her reforms that number had risen to 1 in 3. She polarized the country in a ‘divide and conquer’ strategy that foreshadowed that of Ronald Reagan and more recent American politicians such as Wisconsin Governor Scott Walker. The effect of her policy was to foreclose on the economic mobility into the middle class.

They call her The Queen Mother of Financial Austerity and Financialization.

Hudson recounted how she privatized and carved up  Britain's infrastructure into a series of monopolies in naked capitalism, which we will summarize here.


...Many services were cut back, especially on the least utilized transport routes. The largest privatized bus company was charged with cut-throat monopoly practices. The water system broke down, while consumer charges leapt. Electricity prices were shifted against residential consumers in favor of large industrial users. Economic inequality widened as the industrial labor force shrunk by two million from 1979 to 1997, while wages stagnated in the face of soaring profits for the privatized companies. The tax cuts financed by their selloff turned out to benefit mainly the rich.

Thatcher transformed social organizations so they were managed for shareholders' gains, not for broader public purposes. And what a shock. All it did was make shareholders' rich. But that wasn't the way privatization was sold:


It was taken as a matter of faith that financial gains would be invested in upgrading the enterprises once they were privatized, installing new machinery and hiring more labor to provide better service while increasing output at falling prices. Workers were invited to think of themselves as finance-capitalists-in-miniature, earning dividends and capital gains by investing their savings in the shares in these companies.

That's how Thatcher managed to persuade people to support policies against their own self-interest. It sounds a lot like George W. Bush's "ownership society," doesn't it?


The idea of getting workers to think of themselves as property owners had long been voiced by Conservative politicians. It began with the idea of them owning their own homes, bought on mortgage. Mrs. Thatcher started the process with Council house sales. No less than £24 billion were sold off, larger than any single other public industry. But the privatization that really inaugurated “popular capitalism” was the sale of British Telephone in November 1984. The idea was nothing less than to win workers over to the cause of capitalism as an ideal, by turning them into stockholders in the economy’s commanding heights. This, she hoped, would shift their faith away from socialism in the future to capitalism in the present. “Privatization not only widens share ownership (desirable in itself),” claimed Lawson, “but increases employee share ownership, which previous privatizations show leads to further improved performance.” More politically to the point, giving property to citizens would create “a society with an inbuilt resistance to revolutionary change.”

Then there was the union busting. In 1990, Thatcher passed the U.K.'s equivalent of No Rights at Work. Two years earlier she passed an act that let union members opt out of strikes called without a ballot. Minimum wage laws were abolished for children and young adults under 21.

Hudson concluded that Thatcher had set in motion a vicious downward cycle:


The decline in union power enabled the privatized companies and others to downsize their labor force. Between 1979 and 1986, union membership fell by three million persons. Two million industrial workers were put out of work, including over a million miners.

So what's an appropriate way to honor her legacy? Politicususa tells us of a British film director who wants to privatize her funeral.


...film director Ken Loach thinks former Prime Minister Margaret Thatcher, who died yesterday following a stroke, would have wanted it this way. “How should we honour her? Let’s privatise her funeral,” Loach said. “Put it out to competitive tender and accept the cheapest bid. It’s what she would have wanted.”