The thousands of Teamsters honoring picket lines and picket extensions in 25 cities aren't the only ones showing solidarity for striking Teamsters from Locals 377 in Youngstown, 984 in Memphis and Millington and 728 in McDonough, Ga.

Check out the video above. It shows ABF over-the-road driver and Teamster activist Gail Bristow supporting fellow Teamsters at Republic Services in McDonough..... by delivering her unpicked up trash to Republic's office.

Teamster retirees are showing up to walk the line in San Jose. At the Shelby landfill in Memphis, a long line of trucks were parked by AFSCME drivers who refused to cross the Teamster picket line. Brother Robert Gibson posted on Facebook:


Hell yea, big shout out to the local AFSCME drivers for respecting our picket line at the south Shelby landfill in Memphis.


Tony Gee: Keep it up and stay strong everyone

Pagan Liberal: I went by these guys this morning, and tooted our support. Damn proud of you guys!

Angela M Laub: You have our Support in Erie, Michigan

Yesterday, students from the University of Memphis came out today to the line to support striking Teamster Local 984 members.
How about this messages written in support? 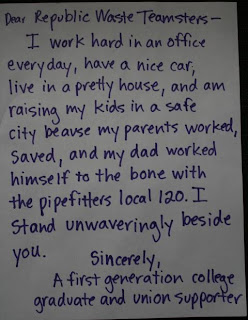 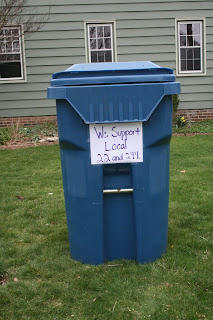 Finally, we want to share this email from Dan Haren:


As an IBEW 540 member and Republic waste customer you guys have the support of our family and neighbors in my community. I have made a few of the neighbors aware of the situation. Hope all goes well.

Just curious... what kind of scab outfit is running current residential routes while you guys strike?

That would be a Bill Gates scab outfit...

This is how friends, family and neighbors are supporting hardworking American workers standing up to one of the richest men in the world. We hope we've given you some ideas.