Kid Rock embarrassed to be a Republican (sometimes) 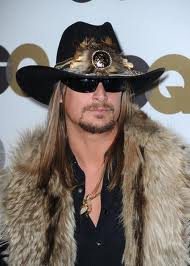 Kid Rock, the rapper-turned-rocker, famously supported Mitt Romney for president but now says he's ashamed to be a Republican. Sometimes.

Here's what he told Rolling Stone:


Athletes and musicians make astronomical amounts of money. People get paid $100 million to throw a baseball! Shouldn't we all take less and pass some of that money onto others? Think about firefighters, teachers and policemen. We should celebrate people that are intellectually smart and trying to make this world a better place.

We think maybe the Kid is confused. (It's been known to happen to rock musicians.) Kid Rock's concern about teachers doesn't square with support for the Republican Party. After all, it was Republican lawmakers who savagely attacked teachers last year by ramming No Rights At Work laws through the Michigan  Legislature.

Kid Rock is also trying to make his concerts more affordable, a laudable goal. But Republican lawmakers are repealing laws eliminating the cap on scalped tickets, which are aimed at protecting consumers. The Kid doesn't like that either:


That's one of the times I'm fucking embarrassed to be a Republican. It's fucking Republican lawmakers passing those laws, you dumbasses. They already did it in New York and they're trying to do it in Michigan. I've even called some of those guys to try and stop it.

Wish he'd call some of those guys when No Rights At Work was moving through the Legislature as fast as, um, poop through a goose.

There's further evidence that maybe Kid Rock was dropped on his head when he was a little boy. Remember his "Made in Detroit" line of clothing ... that isn't made in Detroit? The Detroit Free Press published an expose about it last year. Columnist Susan Tompor wrote,


So why in the world are Kid Rock's high-end "Made in Detroit" T-shirts made in the Dominican Republic? Or some other country?...

On top of that, many of the adult-sized Made in Detroit shirts no longer have any labels to tell you exactly where the T-shirts themselves are made.

You just can't make this stuff up.