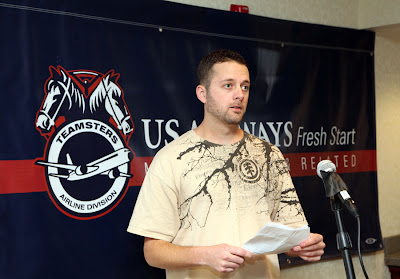 US Airways mechanics shared their concerns about the total lack of representation under the IAM during General President Jim Hoffa's visit to Charlotte on Wednesday.

“There is no union presence, there is no sense of pride,” said Blake Silverstein from Philadelphia, describing the IAM’s poor representation. 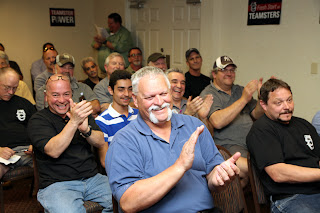 "Now is the time for it--I really believe we can become Teamsters," he said.

We posted to Facebook a photo of Teamster General President Jim Hoffa talking to the crowd in Charlotte. We got lots of positive comments, such as:


Kenney Hamilton
More benefits to organized labor than dollars and cents, you have a voice which you need so badly today.

Jacob Hoss
You are a great American, Mr Hoffa. I'm starting to wish you were President of more than just the Teamsters Union.

Greg Head
No Doubt ! I'm retired Tractor Trailer Mechanic that organized a contract with Local 247 in Detroit , for the Mechanics in a Trucking Co. That only the Drivers were members of 247. Without us 'Mechanics' they didn't have a Job or come home to there Family's alive ! Same goes for your loved ones at 30,000 feet in the Air ! You better take of those on Ground that maintain these Aircraft and much deserving of Fair wages , decent health care and collective bargaining without Any questions or Doubt !!! Good Luck My Brothers !!! ' Take care of those on the Ground' I meant to Say.

Norman Glenn
unions are like the n.r.a. if it wasnt for them us working stiffs wouldnt have anything.

Posted by Teamster Power at 5:05 PM