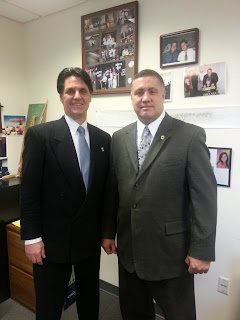 Mark Torres joined the Teamsters in 1990 when he became employed at New York University (NYU) in the HVAC department. Now, after two decades of hard work, he’s the general counsel for New York’s Local 810.


A few years after starting his job at NYU, he became the shop steward in his department. His business agent with Local 810, based in Long Island City, N.Y., was among the first to notice Torres’ potential, so he appointed Torres chief steward where he would assist in grievance processing and collective bargaining.
“When I first met him, he stood out because he seemed very intelligent. I knew he’d make a good head steward,” said John Mascali, Local 810 business agent. “As head steward, Mark did an incredible job.”
As he continued to work, Torres pursued a higher education and in 2003, he received a bachelor’s degree, with honors, from NYU. He then proceeded to law school where he earned his law degree from Fordham Law School in 2008. Torres earned both of these degrees while working full time, serving as a shop steward and raising a family.
Shortly after graduating with his law degree, Torres left his job at NYU to work at Proskauer Rose LLP where he practiced in that firm’s renowned employee benefits department. Then in 2009, he was offered the position of General Counsel at Local 810 where he represents the local on all labor matters and represents the local’s three employee benefit funds.
Torres has a tireless work ethic and is dedicated to the labor movement. As a former member of the union he now serves as counsel, Torres relies heavily on his personal life experience to represent the many members of Local 810.
“Without a doubt, I owe all of my success to my affiliation with the Teamsters which gave me the job security to allow me to pursue a higher education and become what I am today. I particularly with the thank Louis Smith and Michael Smith, along with the rest of Local 810, for their foresight, tutelage and leadership,” Torres said. “Most of all, I am eternally greateful that they have put their undying trust in me to represent thousands of members in the position I have always wanted.”
Torres’ story is a fine example of being part of the Teamster family.
“He’s really an asset. Our local is lucky to have him. All Teamsters are lucky to have him on their side,” Mascali said.
“I am an attorney in practice and title, but at heart I am a Teamster with a law degree and that’s something that I will always be.”
Posted by Teamster Power at 10:14 AM