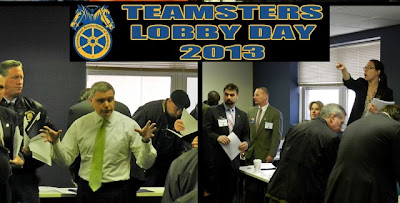 New York Teamsters are going all out to support legislation that will crack down on non-union cheats like FedEx Ground that  misclassify their workers as independent contractors.

Companies in New York and across the country save millions of dollars a year by avoiding their responsibilities to paying into workers' compensation and unemployment funds.

During a Teamster advocacy day in Albany last week, our brothers and sisters met with state lawmakers to urge them to back SB 4589 and AB 5237, two identical bills introduced earlier this year in both chambers of the state Legislature. The measures would prevent the misclassification of commercial goods transportation services employees and bring added protections to thousands of workers statewide. A legislative memo detailing AB 5237 explains the size of the problem:


A study conducted by Cornell University's School of Industrial and Labor Relations found that in New York State between 2002 and 2005, nearly 40,000 employers misclassified more than 700,000 workers.

The memo also states the problem is especially acute in the trucking industry:

Unlike real independent contractors, these workers are subject to stringent behavioral controls and are financially dependent on the company. Such drivers who functionally operate as employees are classified as independent contractors and therefore deprived of proper social security benefits, healthcare, workers' compensation, unemployment benefits, minimum wage protections, rights to join a union, and the right to a safe and healthful workplace.

No action on either bill is currently scheduled. However, this is the time for labor supporters in New York to contact their state legislators and urge them to support hard-working drivers across the state. Teamster pride!