Just when you thought the Billionaires' News Network couldn't get worse... 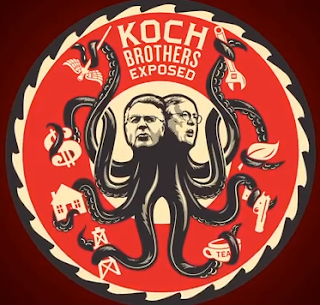 We've noted from time to time that there's a news network devoted to empowering billionaires and impoverishing 99 percent of Americans.

It's about to get bigger.

The New York Post and Fox News, owned by billionaire Rupert Murdoch, are the best known and most hated of the Billionaire Empowerment Network. There's plenty more, though: Glenn Beck's Blaze website, for example, is practically a subsidiary of the billionaire astroturf group FreedomWorks. The Franklin Center, which has a statehouse news service in four states, gets its funding from the shadowy billionaire group called Donor's Trust.

Last week's coverage of the Boston Marathon bombing and manhunt was a spectacular disaster for the Billionaire Empowerment Network, though. Eric Boehlert gives us the lowlights at Huffington Post:


It was a memorable week in which the conservative media's highest profile newspaper, Rupert Murdoch's New York Post, seemed committed to getting as many stories wrong about the Boston attack as possible.

The hapless Post somehow managed to completely botch the simplest Journalism 101 fact of how many people were killed in the Patriot's Day attack. But hey, according to beleaguered Post editor Col Allan the Post tried its best and that's all that really matters.


Glenn Beck on April 18 announced that his website, The Blaze, was breaking news about the Boston Marathon bombing: A Saudi national student on a student visa was "absolutely involved" in the Patriot's Day blast was being deported by the U.S. government for security reason.

Beck went further, claiming the student, or "dirt bag," as the host described him, was "possibly the ringleader" in the bombing that killed three people and injured more than one hundred, and the government was deliberately covering it up.

Beck urged listeners to spread the breaking news via Twitter and Facebook because, he warned, the mainstream media would ignore the revelation. But the right-wing media would pick up the slack. Fox News' Sean Hannity helped launch the story on April 17 and continued to fan it yesterday, claiming the student had previously "been involved with a terrorist or terror activity," while a swarm of right-wing sites pushed the paranoid tale.

So the news that the Benedict Arnold Koch brothers want to buy some of the biggest and most reputable newspapers in the country does not bode well for the state of journalism. They are reportedly salivating over the prospect of buying the Tribune Company, which includes the Chicago Tribune, The Los Angeles Times, The Baltimore Sun, The Hartford Courant and The Orlando Sentinel. Their goal is to make sure the "libertarian" voice is heard.

Let's be clear. There's nothing "libertarian" or "conservative" about the Koch brothers. It's misleading to put that label on what is basically a gigantic ripoff of American taxpayers and an attempt to restrict the rights and independence of ordinary people.

They are relentlessly trying to squash First Amendment rights through ag-gag laws promoted by ALEC, the corporate escort service for state lawmakers they fund. That's not libertarian and it's not conservative.

Through ALEC, they want to eradicate public education so privatized education companies can loot taxpayers for their shareholders' benefit. That's not conservative and it's not libertarian. It's piracy.

They want to ranch and log on public lands owned by U.S. taxpayers for their next to nothing. That's not conservative and it's not libertarian.  It's pillage.

They want the government to seize private property by the power of eminent domain for their pipelines. That sure as hell isn't libertarian.

We could go on about the Koch brothers, but we'll leave it for another day. Or days.