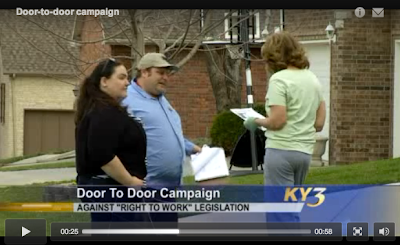 A Missouri state lawmaker and ALEC stooge is pushing a No Rights At Work bill through the Legislature.

Union members called on Burlison's neighbors over the weekend to tell them the bill is bad for all working people. Their message: Working people in Right to Work states make less money.


Members of "We Are Missouri" canvassed several Springfield neighborhoods on Saturday--all in Representative Burlison's district,--to campaign against the legislation.

They say if it passes, it could make it harder on all workers in Missouri, not just public employees.

Watch the video report here. View the Facebook photo gallery here. And stay tuned.
Posted by Teamster Power at 11:59 AM