"I Haven't Eaten for 3 Days in Solidarity": Stories from a Hunger Striker 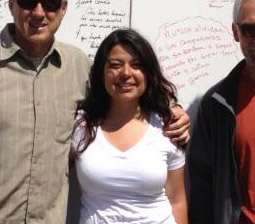 Cross-posting from our brothers and sisters at UNITE HERE:

We are three days into a five-day hunger strike that was called to save the jobs of nine immigrant workers at the Hilton Mission Valley. I, along with six others, have refused to eat since Friday morning. The nine workers we are supporting are set to be fired on Monday April 8th and Tuesday April 9th because after they tried to organize a union, Evolution Hospitality decided to use E-Verify. This is a program that checks immigrants' documented status, a program that isn't even mandatory with the federal government.

The nine workers who will be fired are immigrant women who have worked at the Hilton Mission Valley between 2 and 18 years. They are mothers who play a vital role in supporting their families, even though they make as little as $8.50 an hour and are unable to afford the company's expensive family health insurance plan. I don't know how they do it. Somehow, these women have been raising their families on so little.

This has been difficult. One of the other hunger strikers was so ill that he was rushed to the hospital yesterday. My friends and family have asked me why I would do something as extreme as not eat for five days. Nonetheless, I am striking because I believe firing hard-working people who are simply asking for respect and some dignity is unacceptable. My sacrifice pales in comparison to the sacrifice that many immigrant workers make just to take care of their families. Because of our broken immigration system, many people are permanently separated from family members in their home countries, they live in constant fear of apprehension and deportation, and they work for employers who do not deem them worthy of a living wage.

I am also willing to stand up for these workers because I know what it's like to struggle and be denied value because of the work you do. My grandparents were farmworkers, my parents worked as farmworkers and later service sector workers, and I worked as a housekeeper for minimum wage while I made my way through college. Some of my earliest memories are of my mother trying to make a small piece of meat feed our whole family and of rolling pennies so that we could afford to buy each other presents for Christmas. Despite the fact that I admired my parents and grandparents for how hard they worked, for most of my childhood I also had to witness them do their best to make ends meet. In my family, it was a daily struggle. Just as the workers of the Hilton Mission Valley, we should not have had to struggle so much just for the chance at a decent life.

Heading into the fourth day of the hunger strike, I am feeling some uncertainty about the end results, but as I sit with the Hilton Mission Valley workers who are likely to be fired, I know that I'm not alone in this feeling. My hope is that we can start recognizing that all workers have dignity and that we give all people who do the work that runs our economy the means to a decent life.
Posted by Teamster Power at 3:26 PM