Be very afraid: GOP wants to take away your overtime 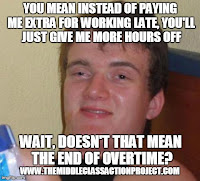 Republicans in Congress are gunning for your overtime.

They claim they're replacing it with "comp time" to make your work "more flexible."

They aren't and it won't be.

Last week, a House committee passed a bill to let employers avoid paying overtime. Instead, they could promise you'll get some time off -- sometime.


...the House Committee on Education and the Workforce approved along party lines the Working Families Flexibility Act after defeating an amendment that would have substituted a paid sick leave mandate along the lines of the Healthy Families Act.  H.R. 1406 would amend the Fair Labor Standards Act to let private sector employers offer compensatory time off in lieu of overtime pay.

Rep. George Miller, a California Democrat, tells the truth about what the bill would do:


...this bill will not provide greater flexibility to working families. It’s really about working more and getting less at the end of the week.

The first problem is pay. Wages have stagnated. As a share of national income, workers’ earnings have fallen to their lowest level in 50 years, while corporate profits have risen to their highest share. The bottom line is that America’s workers need a raise. But this bill gives them a pay cut.

Under current law, if a worker works overtime, she gets those hours paid at a premium rate in the next paycheck. Under H.R. 1406, she would work those overtime hours for free with the hope - not the guarantee - that the employer will give her paid time off when she needs it.

Effectively, this bill asks workers to work extra hours and give their employers an interest-free loan.

It also discourages employers from giving workers raises if they have accrued unused comp time. And the bill does not include adequate protections for workers who are fired or see their schedules cut because they refuse to take comp time in lieu of overtime pay...

The second major problem confronting today’s workforce is how to balance work and family...

Employers already have flexibility to provide all workers with paid or unpaid comp time.

The one thing employers cannot do today is fail to pay hourly workers overtime compensation after 40 hours in a workweek. By lifting that prohibition, H.R. 1406 makes it cheaper for employers to demand excessive work hours from their employees.

And, as she earns a bank of comp time hours in lieu of overtime pay, she is not guaranteed the right to take it when she needs it. The employer will ultimately get to decide.

Posted by Teamster Power at 9:29 AM