The BLET again celebrates its history on May 8

The Brotherhood of Locomotive Engineers and Trainmen will proudly celebrate their 150th anniversary on May 8 with an event in the state where it all began: Michigan.


The BLET‘s members, friends and colleagues will gather at the Westin Book Cadillac Detroit hotel — the same hotel where we celebrated our 75th and 100th Anniversaries — to commemorate this momentous occasion. To honor this historic milestone, we are planning an event that will demonstrate to government, the industry and the nation why we are proud to be American and proud to be Union.

The Teamsters, of which the BLET is now a part, are collecting memorabilia from the Brotherhood's long, rich history. The BLET from the start promoted the union's history. Below is a program book from the Tenth Biennial Convention in 1912. The book gives a solid overview of the union’s history. It also includes in depth information on their very active Women’s Auxiliary and has a variety of photos of leaders through the years. 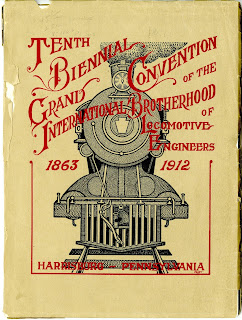 Here is an actual cover of the November 6, 1886 Harper’s Weekly magazine featuring the Grand Chief of the BLE Peter Arthur. Arthur, a very popular leader, was elected Grand Chief in 1873 and remained in the position until his death in 1903. He is in the National Railroad Hall of Fame. 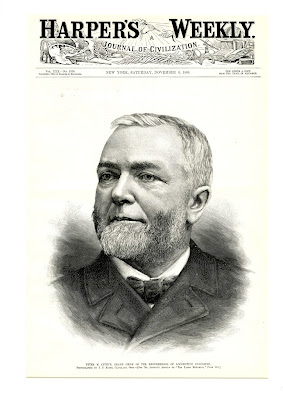 The BLET's Constitution evolved over the years. In 1868 it stated, “The purpose of the organization shall be to more effectually combine the interests of Locomotive Engineers to elevate their standing as such and their character as men.” 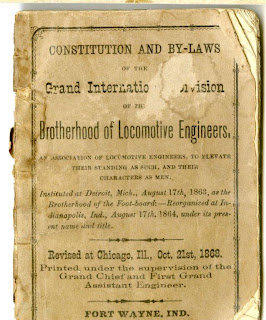 By 1918, the Constitution's language was refined “The purpose of this organization shall be to combine the interests of Locomotive Engineers; elevate their social, moral and intellectual standing; to guard their financial interests and promote their general welfare; its cardinal principles sobriety, truth, justice and morality.

And also the aim of the organization will be co-operation and the cultivation of amicable relations with the employer and to guarantee fulfillment of every contract made in its name by the use of every power vested in it.” 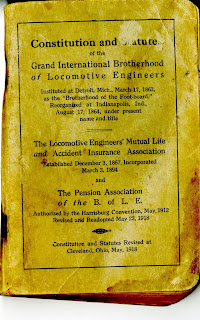 By 1933, The constitutional principles remain the same, but the following was added:
“Our Platform: To work for more healthful  and sanitary conditions on locomotives; To stimulate the political education of the members to understand their political rights and use the ballot intelligently to the end that the Government may be a Government of, for and by the people and not be used as a tool to further the ends of combinations of Capital for its own aggrandizement.”

AND “Attention: Remember, your membership is appreciated and valued in proportion to the interest you take in doing your duty.”

Well said, brothers.
Posted by Teamster Power at 11:16 AM