Dozens of Boston Teamsters from Local 25 are locking arms outside Briggs Field at MIT to protect those mourning MIT Officer Sean Collier from disruptions by the Westboro Baptist Church hate group.

Collier, 27, was killed by the two terrorists who bombed the Boston Marathon. Local 25 President Sean O'Brien vowed to prevent hate group protests at any of the bombing victims' funeral services. More than a thousand Teamsters and union members protected the funeral service of bombing victim Krystle Campbell from the Westboro hate group in Medford, Mass., on Monday.

Local 25's 18-wheeler pulled up alongside the field early this morning. Police officers lined up in front of the truck to have their pictures taken.
As a retired military veteran named Bill wrote to O'Brien yesterday in an email,


When those 18-wheelers pulled up in front of the church, that was a statement ...  let your people know that the logo they wear on their shirts and paint on those trucks means a hell of a lot more to the citizens of this country and this great city than they can imagine.

The Boston Globe reported the service will be attended by as many as 10,000 people:


...the Massachusetts Institute of Technology will host a memorial service that is expected to be attended by Vice President Joe Biden, top MIT officials, police officers from across the country, and other members of the MIT community.

The service, which will be held on Briggs Field, is expected to draw up to 10,000 attendees. Only law enforcement and members of the MIT community with school identification may attend; the event is not open to the general public. 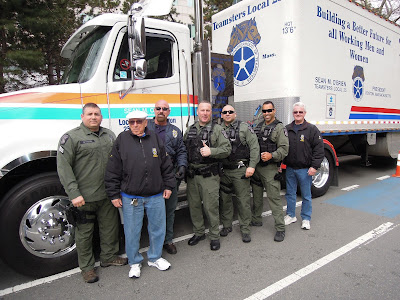 Brother Jim Chaput, a member of Local 25, voiced the sentiment of the Teamsters who blocked the protest on Monday:


I was honored to be there standing shoulder to shoulder with my fellow Local 25 Brothers and Sisters! We made a statement that was heard and seen by everyone, especially the hate filled scum called the Westboro Baptist Church. Local 25 will NEVER back down!

The MIT police created a website to leave condolences for Officer Collier here.
Posted by Teamster Power at 12:08 PM