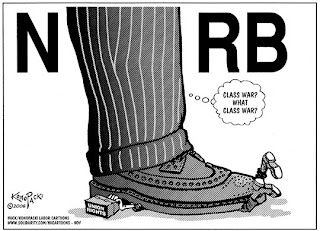 Now the anti-worker extremists in the U.S. House of Representatives want to shut down the NLRB. They've introduced a bill that would effectively take away the board's ability to function.

That would strip working men and women of rights and protections that they fought long and hard to win over 80 years ago, according to Teamsters General President Jim Hoffa.


The White House says President Barack Obama would veto a Republican bill that would effectively shut down the National Labor Relations Board until certain conditions are met.

Republicans have claimed the board is illegitimate since an appeals court panel ruled in January that Obama violated the Constitution when he bypassed the Senate to fill vacancies on the board.

House Republicans are expected to vote this week to prevent the board from conducting business until the Senate confirms new members constituting a quorum or the Supreme Court decides the board has the authority to act. The bill isn't expected to gain traction in the Senate.

Hoffa wrote a letter today to members of Congress today urging them to vote against the bill. Here's the letter:


On behalf of the 1.4 million members of the International Brotherhood of Teamsters, I strongly urge you to vote against H.R. 1120, the so-called “Preventing Greater Uncertainty in Labor Management Relations Act.”  This deceptively titled legislation would, in effect, shut down the National Labor Relations Board (NLRB) indefinitely; it would deprive both workers and management of the ability to have their rights adjudicated when a violation of the National Labor Relations Act (NLRA) is alleged. H.R. 1120 would require the NLRB to cease all activity requiring a quorum and prohibit it from enforcing any action taken after January 4, 2012.

Entrusted with exclusive jurisdiction to enforce the NLRA, the only way the rights guaranteed by the NLRA can be protected is by action of the NLRB. There is no other forum in which workers, and employers, can seek redress when their rights under the Act are violated.  Workers and employers would both lack the ability to secure rulings that protect their rights and the public interest, in being free from unfair labor practices in their relationships.

H.R. 1120 does not eliminate uncertainty, but creates doubt and chaos in our system of labor law and labor-management relations.  The rights that the NLRA protects and the framework the Act guarantees are only as real as the NLRB’s ability to enforce them.

H.R. 1120 would strip working men and women of rights and protections that they fought long and hard to win over 80 years ago.  The assaults on the President’s recess appointments are another in a series of intensifying attacks by those who want to go back to an era when working men and women were without rights, protections, and a voice in the workplace.  They should also be viewed in the context of the unprecedented attacks on the NLRB over these past several years – efforts to eviscerate the Board’s remedies, to raise insurmountable barriers for workers seeking to form a union, and attempts to defund and abolish the Board – in short, an effort to eviscerate the NLRA.