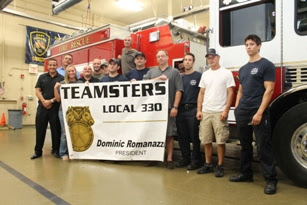 Nineteen firefighters in East Dundee and Countryside will get a raise after ratifying their first union contract with Teamsters Local 330.

The part-time firefighters, paramedics and EMTs voted 12-1 to secure their rights after voting to join Elgin-based Local 330 last December. During seven rounds of contract negotiations from February through June, the local union worked to establish job security, safety and seniority rights for the public employees. The union also fought for pay increases over three years.

In the first year alone the firefighters will get a 5 percent wage hike.


Local 330 is extremely proud to represent the East Dundee and Countryside Fire Protection District, home to public servants who stick together and do what’s right. With all the rights and protections of a strong Teamster contract, these workers have taken control of their future to better provide for their families and co-workers.

Teamsters Local 330 represents more than 800 public employees in Public Works, Fire Protection, Judicial Court Services and other related industries across northern Illinois. Local 330 is an affiliate of Teamsters Joint Council 25, which represents more than 100,000 hardworking men and women throughout Illinois and northwest Indiana.
Posted by Teamster Power at 11:18 AM