Fight backroom deals for the 1% 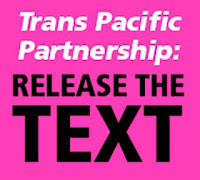 Teamsters from the Capitol Region will protest the 14th round of secret talks for the latest job-killing trade deal in Leesburg, Va., on Sunday. Many social justice organizations want the Trans-Pacific Partnership (TPP) to be negotiated in the open. They include unions, environmental, public health, family farm, consumer, and Occupy.

Here's what the International Brotherhood of Teamsters is telling its members in Virginia, Maryland and the District of Columbia.

If you live in the region, you can RSVP for the rally -- and get a free ride on a union-operated bus -- here.
Posted by Teamster Power at 1:02 PM