The Greatest Generation did it with collective bargaining 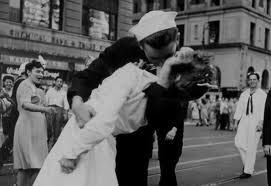 It's time to return to the values embraced by The Greatest Generation.

The Greatest Generation fought two world wars, beat back communism, built the interstate highway system, put a man on the moon and created the most powerful manufacturing economy the world has ever seen.

The Greatest Generation bargained collectively for a fair share of the prosperity it created. That's why America led the world during the postwar era. That's why the words "Made in America"meant something then.

Steve Cooper at We Party Patriots shared another politician's response to Christie. Elizabeth Warren, candidate for U.S. Senate from Massachusetts, sent an email to her followers that said:


Let’s talk about what really made the Greatest Generation so great.

Coming out of the Great Depression, America was at a crossroads. The future of our economy — and our democracy — was at stake.

We made a decision together as a country: To invest in ourselves, in our kids, and in our future. For nearly half a century, that’s just what we did.

And now we find ourselves in a very different world from the one our parents and grandparents built. We are now in a world in which the rich skim more off the top in taxes and special deals, and they leave less and less for our schools, for roads and bridges, for medical and scientific research — less to build a future.

Posted by Teamster Power at 7:11 PM