Note: This is a first-person account of Jerome Singletary, a member of Teamsters Local 396 in Los Angeles. He is attending the Teamsters National Black Caucus conference in Charlotte, N.C.

Today was another phenomenal day. It started off with International Vice President George Miranda talking about the importance of voting for President Obama. Brother Miranda’s message was very clear and strong, similar to his message at the Hispanic Caucus banquet, which I attended earlier this month in Los Angles. You have to get the people out to vote in this election. 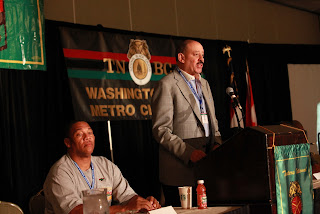 Next was James Andrews, president of the North Carolina AFL-CIO, who followed with a very powerful message about the need to vote. The message was similar but they each said it in different ways and offered techniques and tips on reaching the same goal—to take back to our locals and communities ways we can take action vs. just talking about taking action.

W.C. Smith, executive assistant to General President Hoffa, reiterated the need to vote. Like the others, the message was the same, but they brought different stories and gave different scenarios.

To me, it was powerful because it means a lot. So much is at stake with the election and the states trying to suppress the vote. This overall message is something I will take back to my local and to my community.

Yesterday afternoon, we saw a great performance by Mzuri Moyo, who portrayed civil rights leader Fannie Lou Hamer. It was very touching. It brought tears to my eyes to see the struggle she went through as a human being to win the right to vote. She stood for something. Hamer said, “I am sick and tired about being sick and tired.”

Read more about the conference (and check out the photos) here.