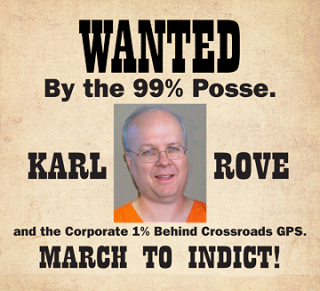 Well, that isn't quite what the St. Louis Post-Dispatch editors said. But it's close.

Here's what they said about Rove, whose Crossroads GPS Super PAC (along with the Koch brothers' Americans for Prosperity) has already dumped $60 million of unknown origin into political attack ads:


The 217,430 Missouri GOP voters who decided on Aug. 7 that they wanted Mr. (Todd) Akin to take on Democratic incumbent Claire McCaskill in a race for the U.S. Senate should be deeply offended by what Mr. Rove is trying to pull.

On Monday, following Mr. Akin's ridiculously stupid comments about "legitimate rape," Mr. Rove's billionaire-funded Crossroads GPS, a Super PAC that intends to spend millions of non-Missouri dollars to defeat Ms. McCaskill, said that it would take its money and spend it elsewhere if Mr. Akin didn't withdraw from the race.

Once Mr. Rove spoke with his donors' cash, other top Republicans fell in line. On Tuesday, U.S. Sen. Roy Blunt and former Sens. Christopher "Kit" Bond, John C. Danforth and John Ashcroft all called on Mr. Akin to step down.

As we write this, Mr. Akin hasn't withdrawn.

That one man — Mr. Rove — has the power and audacity to try to undo the will of 217,430 voters, and that many top Missouri Republicans are aiding and abetting his efforts, should confound and dismay most Americans.

The editors note that Rove did something like this before in Missouri 39 years ago. He tried to steal the leadership of the national college Republicans by questioning his opponent's qualifications to vote.

They conclude that Rove's bullying has nothing to do with Todd Akin saying dumb things or Sen. Claire McCaskill's vote on health insurance reform:


To Mr. Rove, this is simply about removing obstacles to his power. Ms. McCaskill was in his way. Now it's Mr. Akin. Voters? They're just a means to an end.