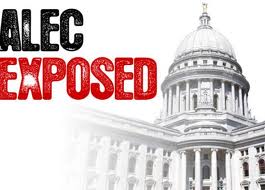 This just in! Five more companies have left ALEC, the corporate front group behind most of the anti-worker, anti-middle class laws that state legislatures have passed.

Color of Change tells us:


Five more major national and global corporate members of the American Legislative Exchange Council (ALEC) have told leading online civil rights group ColorOfChange that they have cut ties to the right-wing policy group, bringing the total of companies to drop ALEC to 38. They include: General Electric, The Western Union Company, Sprint Nextel Corporation, Symantec Corporation, and Reckitt Benckiser Group plc. The announcement of these major departures comes days before the Republican National Convention is scheduled to open in Tampa, FL.

"These significant developments, coupled with recent withdrawals from ALEC by companies like Walgreens and GM, further prove that everyday people working together to hold corporations accountable can achieve tremendous change," said ColorOfChange.org Executive Director Rashad Robinson. "ColorOfChange celebrates these corporations who have withdrawn their funding from ALEC, which continues to defend its push to enact discriminatory voter ID laws across the nation."

ColorOfChange has worked in collaboration with the Center for Media and Democracy (CMD), which launched ALECexposed.org last summer to highlight the corporations and politicians that vote on ALEC "model" bills. CMD has also documented ALEC's role in pushing controversial Stand Your Ground and discriminatory voter ID laws. Other allied organizations include CREDO Action, Progressive Change Campaign Committee, Common Cause, ProgressNow, People For the American Way, and SumOfUs.org.

To read more about the damage that ALEC wreaks on our democracy and our economy, check out the ALECExposed website here.
Posted by Teamster Power at 2:43 PM