ALEC loses another member; this time, it's Entergy 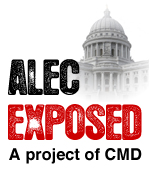 Entergy is the latest corporation to dump ALEC, the front group that wines, dines and bribes writes helpful legislation for lawmakers. It is the second biggest operator of nuclear power plants in the U.S.

According to the Center for Media and Democracy, Entergy is the 33rd corporation and nonprofit groups have cut ties to ALEC. A campaign to expose ALEC (aka "the American Legislative Exchange Council") has inspired public revulsion over the group's agenda of union-busting, deregulation, voter suppression and privatization.

The revelation that Entergy dumped ALEC came about after 41 investors and advocates sent letters to 49 companies that are members of ALEC and asked them why they belonged. (Props to AFSCME and Walden Asset Management for doing the lifting on this.) Entergy sent a letter to Timothy Smith, a senior vice president at Walden, explaining that it is no longer a member of ALEC.

Meanwhile, all kinds of other dirt is surfacing about ALEC. In Ohio, a report about ALEC's influence on lawmakers was released today. According to Progress Ohio, seven of ALEC's sins include,
Earlier this week in Michigan, Progress Michigan reported that ALEC wrote bills to suppress the vote and to help corporate bottom lines at the expense of middle-class families. The Detroit News reported,

Progress Michigan, a left-leaning political action group, said they've determined at least 20 bills echo legislation from the American Legislative Exchange Council, including some that appear to have been cut and pasted from "model bills" provided by the group of state lawmakers, businesses and corporate lobbyists.

Chalk it up to another bad week for ALEC. (So sad.)