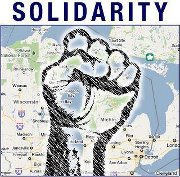 Ruh-roh: Trouble for the constitutional amendment to protect collective bargaining in Michigan.

Michigan's Board of Canvassers yesterday deadlocked on whether the amendment should be put on the ballot. That means supporters have only a short time to appeal their decision (or lack thereof) to the state Supreme Court.


Ballot certification of the union-backed Protect Our Jobs initiative, which would enshrine collective-bargaining rights in the state constitution, failed in a 2-2 vote. The two Democratic appointees, Chairwoman Julie Matuzak and James Waters, voted to put the question on the Nov. 6 ballot. The two Republican appointees, Norman Shinkle and Colleen Pero, voted to reject it...

On Wednesday, attorneys for Protect Our Jobs also filed appeals with the Michigan Court of Appeals and the Supreme Court. But the challenge they face could be tougher.
First, there is much less time for legal maneuvering. State election officials say they must have the issue resolved by Aug. 27 -- less than two weeks away -- to allow time to prepare and print ballots.

Second, the initial rejection of the Stand Up for Democracy proposal dealt with the highly technical issue of the font size used in printing the petition's heading, but more substantive legal questions are at issue in the Protect Our Jobs case.

There is something you can do if you live in Michigan: Send a letter to Michigan's attorney general demanding that he give the people their voice back. By way of explanation:


Our right to collectively bargain in Michigan is under attack by partisan politicians and the corporations that help fund their campaigns.  Bill Schuette, the Attorney General of Michigan, has pressured the Board of Canvassers into keeping this important initiative off the ballot....The Protect Our Jobs measure was ripped from the ballot even though your fellow Teamsters and others collected over 700,000 signatures and met all the legal requirements to place the crucial measure on the ballot.

The Protect Our Jobs coalition has a great Facebook page here, where you can follow developments. They also have a website here.
Posted by Teamster Power at 4:43 PM