Teamster women won't back down 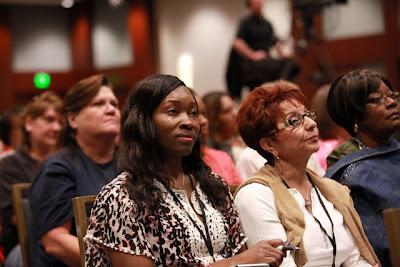 The hundreds of Teamster women converging this year in San Francisco are ready to go home and campaign for political candidates who side with workers. Today was the second day of inspirational speeches and calls to get out and work for fairness, for justice, for the future of the middle class.

Kelly Rivera Craine, is a shop steward and members of Teamsters Local 332 in Flint, Mich. Interviewed at the Teamsters Women's Conference, she said she loves coming:


It gets me pumped up and motivated. We went through negotiations this year at Genesys Health System, where I work as a registered nurse. This conference gets me recharged and ready to go back to my local and my job. We are excited to have 20 women here from Local 332.

At the conference today we heard from President Hoffa. He was inspirational. He’s an awesome speaker.  President Hoffa and Gavin Newsom, the lieutenant governor of California, both talked about getting people out to vote. It’s our right and it’s one of the reasons I became a shop steward, because I don’t want to sit back. I decided to try and make a change. When I see people not voting, it’s like why are you complaining? Everyone needs to get out and vote.

We also heard from Joanne Hayes-White, the chief of the San Francisco Fire Department. She made a comment about grabbing on to opportunities and about never knowing what you can do until you try. Fire fighters are predominantly male, so to see what she has done while raising a family shows that if you really work hard, you can do it.

Diane Ersbo, a member of Teamsters Local 638 in Minneapolis, says there aren't enough words to describe the feeling of being in San Francisco with her Teamster sisters. But she tried! 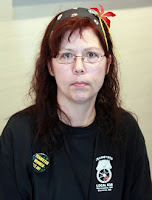 This year is more important than any other voting year. We have everything at stake and we need to know who we are voting for. It’s time we organize our neighbors, our friends, our cousins and everyone we know. This isn’t just about this election; it’s about the shoulders we stand on. It’s about the life we were given because of the work done by our parents’ generation. We cannot lose all the gains our union has made in building the middle class. I have had a good life and I want to pass that on to my son.

There is a war on workers like never before, and that was the topic of the conference today. We know how to build Teamster power and we need every single Teamster in the Teamsters Union to do that now. You’re being called out on the battlefield to stand up for justice and for workers’ rights, so grab your boots, sisters and brothers, and let’s go! Make sure you organize, organize, organize and get yourself to the polls to vote. Get educated. Make a difference.

You heard the sisters.