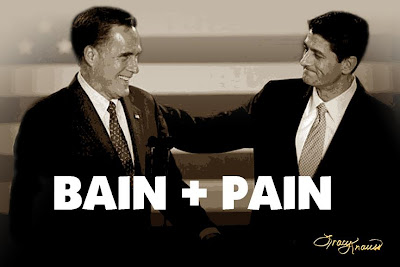 Seriously. Paul Ryan tells us we need to suffer more pain than we already have in order to solve our problems. Presumably those problems are that rich people don't have enough power and money.

Here's Michael Hiltzik on how Ryan's budget would destroy the middle class. First, Ryan would eliminate the mortgage interest deduction:


More than 70% of the mortgage interest payments claimed as deductions ($240 billion) appear on returns filed by people in the income range of $60,000 to $200,000, according to the IRS. Many of these middle-class homeowners base their annual financial planning on tax breaks such as the mortgage deduction. Only about 1.4% of the total is claimed by taxpayers earning $1 million or more.

This is among the reasons that, as the nonpartisan Tax Policy Center recently calculated, sharply lowering marginal rates while cutting out the most popular tax breaks results in net tax cuts for the wealthy and increases for everyone else. (This is what Ryan means by "broadening the tax base" — it means he's coming for you.)

Wiping out Medicare would consume more middle-class income and place a burden on the children and grandchildren of America's elderly. Writes Hiltzik:


Ryan would replace the existing Medicare system of guaranteed treatment (with a nominal individual premium) with one providing vouchers for service through private commercial insurance plans. By design, the vouchers wouldn't cover all costs, and because their value would rise in accordance with a standard inflation measure, not with medical inflation, the gap would widen over time.

The Kaiser Family Foundation calculated that in 2022, the out-of-pocket medical expenses of the typical 65-year-old would come to half his or her Social Security income — double the level under traditional Medicare...The average American would be poorer for it.


...it's the middle class that will pay. They've reached into their pockets to pay for school arts and enrichment programs lopped out of state budgets and carried the burden of tuition hikes at state universities. Teachers of middle- class students — stalwart members of the middle class themselves — will lose their jobs by the thousands. Under Ryan's budget, they'll pay higher federal taxes for the privilege.

By the way, cutting government budgets doesn't make economies grow. It makes them shrink. Just see what budget cutting has done to the UK:


...with the implementation of his austerity plan, the UK is not only experiencing a worse recovery than the one following the Great Depression, but is doing worse than the rest of the Eurozone.