Teamsters in the house in Philly! 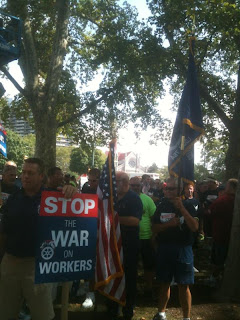 Brother Rick Smith just tweeted this picture from the giant worker's rally in Philly. Teamsters are backstage right now with Sen. Bob Casey and AFL-CIO President Rich Trumka. And you can bet the Teamster truck is there. When we get the photo, we'll post it. We'll also be hearing from Pennsylvania Conference of Teamsters President Bill Hamilton, a key mover behind the rally.

The energy is high. LIUNA is there, chanting, "Here we go, union, Here we go!" Steelworkers, AFA, CWA, ironworkers, the building trades, all there. UNITE HERE tweets,


Up early and proud to stand with working people for America! Thanks Local 57! #WS4A #1u #labor #p2

We learn from @jerrytjordan that the teachers have arrived:

There was a giant CWA Verizon workers rally and march earlier, including Verizon workers in wheelchairs. "Verizon, Verizon, you can't hide, we can see your greedy side," was the battle cry. @MikeElk reports a Mercedes tried to drive through the line of marchers.

He also tells us a 130-pound hipster yelled at the Verizon workers, "Oh you crybabies, pay for your health care like everyone else," and gave them the finger. Then he said to a bunch of union guys, "Who wants to take me on?" Then he ran away.
Posted by Teamster Power at 11:27 AM