What do Teamster women do when attacked?

UPDATES with more AWESOME photos, CORRECTS Mauren's title to director)
We fight back!

That's the message at the Teamsters Women's Conference just getting underway. They're in San Francisco, "a great union town," Sue Mauren called it, to applause.

There was plenty of applause, cheering, whistling and whooping among the 835 participants at the conference known for its energetic (putting it mildly) spirit.

Mauren is the director of the Women's Committee, which stages the annual event. She opened the proceedings with a call to fight for worker-friendly candidates in November.

"We fight back," bellowed the sisters in the audience.

Mauren's advice: "Make sure you network, see old friends, meet new friends, get energized and put on your fighting spirit!"

Local 856 was already energized. They'd already registered dozens of new voters on Wednesday at the San Francisco Hilton Hotel where the Teamster women are staying.

Rome Aloise, president of Teamsters Joint Council 7 in San Francisco, stressed the importance of voting this fall. "If we don't win this election, we're toast," he said.

California Sen. Barbara Boxer took it one further: "If we don't win this election, the middle class will disappear." 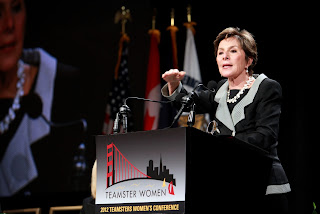 Boxer gave a stemwinder of a speech, calling this November's election an urgent and stark choice between a president who stands up for the middle class or a secretive republican who serves the wealthy elite.

Boxer said she had just delivered 100,000 signatures on a petition to Mitt Romney's $12 million home in San Diego asking him to release his tax returned. "We want to see how much money he shipped overseas," she said. "The wealthy have to pay their fair share."

"When women go to the polls, we win." Boxer said, to applause, cheering, whistling and whooping.
Posted by Teamster Power at 6:29 PM