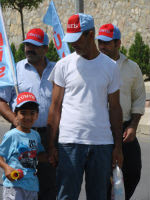 In the last year, DHL Turkey says it has fired 24 workers for “performance related” reasons. But they're fooling no one.

Between last April and November, eight workers were fired for what the DHL called poor performance and endangering worker safety and health. But the workers said managers openly threatened one worker at a time with dismissal for organizing.

The International Transport Workers Federation has been working with TÜMTİS to get the workers’ jobs back. Even after the ITF started talks with management in June, DHL fired seven more workers for supporting the organizing effort.

Nine of the workers currently have cases pending in courts. Eight have been paid but haven’t gotten their jobs back despite a court order.

According to the LabourStart Act Now petition posted by ITF,


Sacked workers are currently standing outside the warehouses in an act of resistance over their unfair dismissal. TÜMTİS has made every attempt to engage local management and seek a resolution to the ongoing dismissals, but to no avail. Local management continues to approach workers who have joined TÜMTİS, reportedly telling them that they must resign from TÜMTİS or they will lose their job. The workers demand the right to become members of TÜMTİS, and organize a union in their workplace, free from intimidation and threat of dismissal.

Last week, DHL International’s Human Resources department agreed with Turkish managers. They said the firings were performance-related and the company is obeying Turkish law. They also said management doesn't need to meet with TÜMTİS because the company doesn’t recognize the union as legally representing the workers.

Currently, 335 DHL Turkey workers are members of TÜMTİS. In addition to ITF, UNI Global Union is helping TÜMTİS and the workers organize free from harassment and intimidation by management at DHL Turkey.

Teamsters in the U.S. know the importance of international labor solidarity – especially with our brothers and sisters in Turkey. Last year the Teamsters helped Turkish UPS workers win the right to representation by TÜMTİS after a drawn out battle with UPS.

Sign the ITF petition and support DHL workers in Turkey.