Another one bites the dust as Amgen dumps ALEC 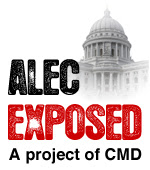 Another pharmaceutical giant has decided it just doesn't look good to belong to ALEC, the anti-worker, anti-consumer corporate front group. Amgen is the 32nd corporation to dump ALEC, according to PR Watch:


More companies have announced they are cutting ties to the American Legislative Exchange Council (ALEC) even as some corporations, like eBay, continue to stand firm.

Amgen, a $15.3 billion pharmaceutical company based in California, announced its determination not to renew its membership on August 3 in response to a letter from a group of concerned shareholders and advocates led by Walden Asset Management and the American Federation of State, County and Municipal Employees (AFSCME). Pfizer, the world's largest pharmaceutical company, has dropped its seat on ALEC's corporate board, according to the agenda from ALEC's 2012 annual meeting. Even commodities and energy trading corporation Louis Dreyfus confirmed to CMD that it had decided not to fund ALEC this year.

Now ebay is under fire for its membership in the controversial organization. PR Watch again:


...representatives of the online auction company eBay go to meetings several times a year and vote to adopt "model" bills and resolutions on these and other issues that favor big business over consumers in the online world.

In ALEC's Communications and Technology Task Force, eBay works with telecommunications giants like AT&T, Verizon, Sprint, Time Warner Cable, Cox Communications, Charter, and Comcast, and right-wing policy groups like Americans for Tax Reform, the Cato Institute, and the Heritage Foundation to produce "model legislation" that is then introduced in state legislatures across the land.

This Task Force has adopted numerous resolutions that favor big business over consumers in arena of telecom and IT. For instance, the task force has passed resolutions against net neutrality and against the public utility model for the provision of broadband services, but they love federal stimulus money for broadband expansion as long as it lines the pockets of big corporations.