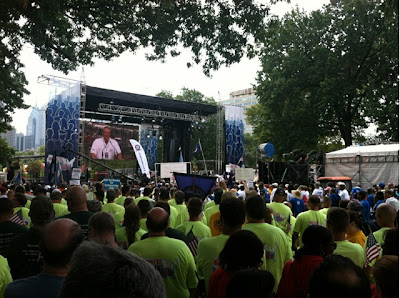 As many as a thousand Teamsters joined the giant Workers Stand for America rally today. The news media is reporting as many as 40,000 people came from all over the country to support the Second Bill of Rights.

Every Teamster local from Pennsylvania was there, as well as from New York, New Jersey and surrounding states. The downside: So many people came that traffic turned into a nightmare and some couldn't get close to the rally itself. 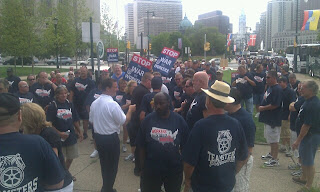 Bill Hamilton, president of the Pennsylvania Conference of Teamsters, said the crowd was enthusiastic and united:


We can't be separated. We can't be divided. The attacks are going to be the same on all of us.

Hamilton praised the International Brotherhood of Electrical Workers for organizing the event. He signed the Second Bill of Rights last night, along with leaders from the other national unions. You can sign it here, even if you couldn't make it to Philadelphia.

Mention of Mitt Romney's choice of Paul Ryan as his running mate drew long and sustained boos. President Obama spoke to the crowd on a live feed. 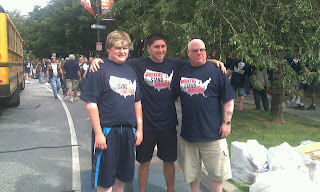 Hamilton said the president's message was "Look what they've done now. Now we have an anti-labor candidate. Look what they're going to do." (Ed. note: They'll cut Social Security, gut Medicare, give tax cuts to the rich so the poor and middle class get less.)

“We want to advance an agenda where it’s okay to have a middle class again and workers who speak up for their rights are not vilified and people who have a decent pension and maybe a little healthcare when they retire aren’t the enemy.”


One final thought: from ‏@Workers4America


All #WS4A flags are made in the USA. Can the @RNC say the same about theirs?