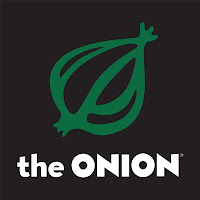 This is a spoof by The Onion and, as usual, it's a better picture of reality than you get in the mainstream media:


A survey released Wednesday by researchers at the University of North Carolina found that despite the many challenges they face, the nation's lowest-income individuals are nonetheless thankful they don't have to endure the unique hardships of the nation's long-suffering middle class.

According to the report, the 46 million Americans who fall below the federal poverty line, though struggling mightily, are at least glad they don't have to live up to some rapidly vanishing American dream of advancing in their career, making more money, and improving their lifestyle, the way their middle-income counterparts do.

"The unrealistic expectations and false hope they experience must be unbearable," Camden, NJ hotel clerk Allison Jacobsen told researchers, noting that while her $22,000 annual salary barely covers her rent and groceries each month, at least she doesn't operate under the flawed assumption that her situation will ever improve. "A life spent constantly stressing out over a dead-end job or struggling to pay off a fixed 30-year mortgage on a continuously depreciating three-bedroom townhouse? It's horrific."

We found this Onion item in the excellent Economic Populist blog, along with a biting comment from another loyal reader. He suggested running some real news and asking yourself if it could be right in The Onion:

There are more. Read the whole thing here.

Posted by Teamster Power at 9:07 AM