Teamsters help write the book on saving the airline industry 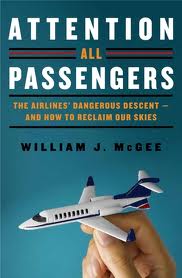 Why has air travel become so miserable? It's fraught with delays, lost luggage, fees, congestion and all manner of unpleasantness.

A recently published book by consumer advocate and journalist William McGee examines the airline industry’s race to the bottom and what we can do to stop it. He quotes Teamster leaders in the book, Attention all Passengers: The Airlines’ Dangerous Decent – and How to Reclaim Our Skies.

McGee, a former airline dispatcher, links the industry's degeneration to executives’ relentless efforts to cut costs. They outsource aircraft maintenance and farm out flights to smaller regional carriers. The results have been devastating for travelers and workers -- but lucrative for legacy airlines. They've made billions from checked baggage alone.

McGee describes how major airlines contract out repairs and other maintenance work to unlicensed mechanics in places like El Salvador and Mexico. Bourne told him,

This is not a paper argument. I have personally encountered problems with outsourced maintenance. We could tell where the repairs had been done when we flew the planes after servicing.

McGee describes his conversation with Hoffa:


If the battle lines are being drawn, I moved from one side of the skirmish to the other, interviewing airline executives and financial analysts, as well as labor officials and academics. But in the annals of the American labor movement, one name undoubtedly stands out from the others: Hoffa…

Once inside the office of James P. Hoffa, the general president of the International Brotherhood of Teamsters, I was equally struck by the spectacular picture-window view of the Capitol dome and the striking resemblance to his father, James R. Hoffa…

I asked to visit Hoffa because I wanted a big-picture perspective, and his opening remarks were as expansive as our view of the Washington Mall…“Corporate America has betrayed America and American workers,” Hoffa said. “Executives don’t see their obligations. All they think about is the next quarter.”… 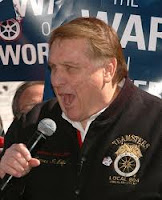 “There’s a way to pay fair wages,” he responded. “A 747 pilot flying to Japan with three hundred people on board? Look how productive he is. He should be paid well.”…“The airlines are part of a bigger picture. They’re moving back all borders. And American corporations are dodging taxes. That’s why there are no jobs.”

It doesn’t have to be that way. McGee lists a number of changes needed to reclaim our skies. They include: partial reregulation; enforcing fair competition and international emissions standards; an end to maintenance outsourcing; higher standards for regional airlines and more transparency for foreign ones; revamped corporate bankruptcy laws; and a passenger bill of rights.

We hope McGee's book inspires more workers and the flying public to come together and take back our skies.