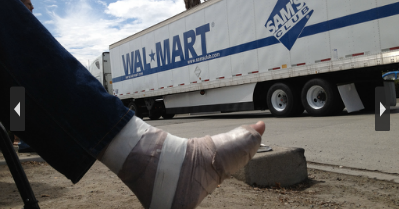 Walmart abuses workers all along the supply chain, from the fields to the factories to the warehouses to the stores. More horror stories are coming to light about Walmart and its contractors after the recent revelations about C.J.'s Seafood in Louisiana. (C.J.'s, a crawfish processor, cheated workers of their pay, forced them to work 24 hours and locked them in the plant.) Workers are subject to enslavement, injury, retaliation and exposure to dangerous chemicals and equipment.

Last week, workers for Walmart and its contractors filed a formal ethics complaint with Walmart's corporate executives in Los Angeles.

The UFCW tells us:


The complaint outlines systemic violations of Walmart’s own Statement of Ethics and Standards for Suppliers....

“This is a pattern. No matter the country, no matter the workplace, no matter the worker, we see that Walmart and its contractors’ deny responsibility, ignore serious problems and fire workers who stand up for change. This behavior should not be rewarded with more stores,” said Guadalupe Palma, a campaign director with Warehouse Workers United, an organization committed to improving warehousing jobs in the Inland Empire...

"So many of my coworkers are living in pain because of the pressure to work fast or lose our jobs,” said Limber Herrera, a warehouse worker in Riverside. “We often breathe a thick black dust that gives us nosebleeds and headaches. We want Walmart to take responsibility and fix these bad working conditions.”

Workers and supporters also presented copies of two petitions to Walmart that garnered a combined 250,000 signatures and cast light on conditions faced by seafood workers who work for Walmart suppliers. Ana Rosa Diaz, one of eight guestworkers who exposed forced labor at Walmart supplier C.J.’s Seafood in Louisiana last month, spoke at the event. Only after Diaz went on strike and 150,000 people pledged their support was Walmart forced to admit to labor violations and suspend its contract with the supplier.

Wait, there's more. In Thailand, a major supplier of shrimp to Walmart enslaved its workers in debt bondage. Reports have surfaced about trafficking of children under 15 at a Thai pineapple factory that sells to Walmart.

There is hope. Workers are starting to stand up for themselves and their co-workers. Two warehouse workers were suspended indefinitely in Riverside, Calif., after filing a complaint with the state about broken equipment, inadequate water and extreme heat. The state ruled they had to have their jobs back.

Still, Walmart workers have a long, long way to go before they're all treated humanely. Read more about the campaign to improve conditions at Walmart and warehouses at warehouseworkersunited.org.
Posted by Teamster Power at 4:09 PM