3 wins for voting rights in Ohio, Texas and Florida 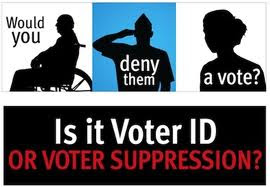 It just got a little harder to steal the presidential election for Mitt Romney.

Courts in three states struck down efforts to prevent Democrats from voting in November. In Florida, a judge permanently removed insane restrictions on voter registration drives. In Texas, the court struck down a law requiring people to show a photo ID to vote. And in Ohio just today, a judge ruled the state cannot stop early voting three days before the election

Vote suppression is usually cleverly disguised as "Voter ID" laws. They try to prevent voting by likely Democrats by requiring identification that's extremely difficult for some people to obtain. But this year voter suppression is taking new shapes, such as an insane law criminalizing voter registration in Florida.


Three months after a federal judge blocked much of Florida’s year-old voter suppression law as an unconstitutional infringement on speech and voting rights, the same judge agreed Tuesday to permanently remove the restrictions on voter registration drives, pending final confirmation that a federal appeals court has dismissed the case. In a settlement, the civil rights groups challenging the law and the state agreed not to appeal the case.

In Texas, the Associated Press tells us:


A three-judge panel in Washington unanimously ruled that the law imposes "strict, unforgiving burdens on the poor" and noted that racial minorities in Texas are more likely to live in poverty...

Republicans are aggressively seeking the requirements in the name of stamping out voter fraud. Democrats, with support from a number of studies, say fraud at the polls is largely non-existent and that Republicans are simply trying to disenfranchise minorities, poor people and college students — all groups that tend to back Democrats.

And in Ohio, we learn from Plunderbund:


A Federal judge rules with Obama that Ohio cannot stop early voting during the 3 days before the election as HB224 attempted. It’s unclear what effect this will have on Secretary of State Jon Husted’s recent directive and firing of two Democrat elections officials who defied said directive.

In case you have any doubt that these new laws are aimed at stealing elections, please note that Pennsylvania's House Majority leader was caught on tape saying his state's voter suppression law "is gonna allow Governor Romney to win the state of Pennsylvania." Or consider that Democratic voter registration all but stopped in Florida. According to the Florida Times-Union,


Just 11,365 new Democratic voters were registered in Florida in the last year vs. 209,425 four years earlier.

What could have caused such a sharp dropoff? A lack of voter enthusiasm? Maybe lack of proximity to a major election?

Those were the weak explanations that a Florida secretary of state official gave to Times-Union reporter Matt Dixon.

What really happened were registration rules that were so radical that a federal court stepped in and invalidated them.

All these efforts to take away the right to vote come from ALEC, the corporate cabal that legally bribes lawmakers to help it destroy the middle class. Jerry Kremer, a former New York state lawmaker, writes in The Huffington Post that ALEC champions voter ID laws. And Kremer points out:


In the 2011 and 2012 sessions lawmakers introduced 62 photo ID bills in 37 states and 10 states have passed photo ID laws since 2008. The legislators who propose these bills claim that they will stop voter fraud but no state that has such a law has been able to prove that there had been any fraud.

Andrew Cohen, writing in The Atlantic, remarked on the reaction stories about voter suppression always get:


Whenever I write about this topic, the reader reaction is always: "I have to show my identification every day. What's the big deal?" But that's not what these laws are about. No one, in South Carolina or elsewhere, votes without first establishing their ID. The central question instead is how far these states may go to force registered voters, who have voted without incident for years, to obtain new forms of identification. Why don't poor people have driver's licenses? Because they can't afford cars. There is a constitutional right to vote -- men and women have died over it. There is no such right to drive.

Posted by Teamster Power at 5:07 PM